BY Heather Hughes on May 1, 2018 | Comments: one comment
Related : Soap Opera, Spoiler, Television, The Bold and the Beautiful 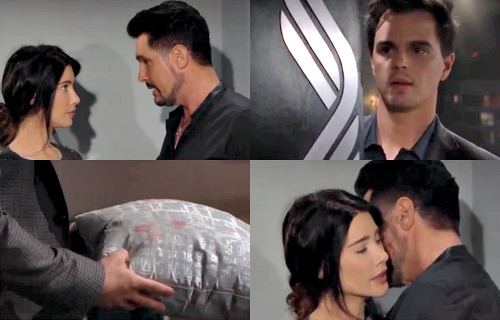 The Bold and the Beautiful (B&B) spoilers tease that we’ll see a shocking confrontation. Wyatt’s (Darin Brooks) news will send Liam (Scott Clifton) into a frenzy, so expect some heartbreaking moments for Steffy (Jacqueline MacInnes Wood). It won’t be long until Liam shows up to demand some answers.

Liam will try to figure out if Wyatt’s (Darin Brooks) claims about Bill and Steffy are true. He knows Wyatt’s been supportive of a “Steam” reunion, so he won’t see any reason why his brother would lie. Nevertheless, Steffy will insist that she only hooked up with Bill once. She’ll promise that Liam’s her true love and the one she wants to be with.

If Liam brings up the apparent secrets between them, Steffy may come clean about Taylor (Hunter Tylo). She might reveal that Bill agreed to protect her mother after the shooting confession. Of course, that disclosure probably won’t do much to help Steffy. It’ll just show that Liam can’t trust her.

Since Steffy deceived him about Taylor’s guilt, Liam will assume she may be lying about other things. Besides, Wyatt seems convinced of Bill and Steffy’s continued involvement. Liam may feel like whether it’s true or not, he can’t go on like this. The fact that he even has to question Steffy’s loyalty is a problem. Liam will realize that Hope (Annika Noelle) is the one he can truly count on.

The Bold and the Beautiful spoilers say Liam will make a decision that leaves Steffy devastated. He’ll announce that he’s filing the annulment papers. Liam will insist that they need to end their marriage and move on as co-parents. He just can’t be in a committed relationship with Steffy after everything that’s happened.

Steffy will undoubtedly beg Liam to reconsider, but he won’t budge for now. Instead, Liam will head straight to Hope and stun her with his choice. He’ll suggest that Hope was right about Steffy causing more pain. Liam will be ready to move forward without Steffy, so Hope’s sure to be thrilled.

B&B fans can expect Steffy to suffer for a while, but Hope will inevitably be next in line. The Bold and the Beautiful spoilers say Bill’s manipulation will be revealed soon enough, so Hope’s victory should be short-lived. We’ll give you updates as other B&B details emerge. Stick with the CBS soap and don’t forget to check CDL often for the latest Bold and the Beautiful spoilers, updates, and news.