BY Heather Hughes on July 28, 2018 | Comments: one comment
Related : Soap Opera, Spoiler, Television, The Bold and the Beautiful 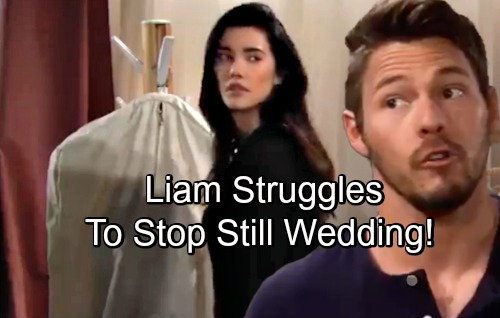 The Bold and the Beautiful (B&B) spoilers tease that Ridge (Thorsten Kaye) won’t change Steffy’s (Jacqueline MacInnes Wood) mind about being with Bill (Don Diamont). She’ll suggest that he should back off and accept this. Steffy’s fed up with Liam (Scott Clifton), so she’s ready to move on.

However, Ridge won’t want to surrender just yet. Despite his lack of success, Ridge will keep working toward his goal. He’ll refuse to stand by and let Steffy make such an epic mistake. Ridge may not be able to get through to Steffy, but he’ll think there’s someone else who can.

The Bold and the Beautiful spoilers say Ridge will track down Liam and call for action. He’ll be furious with Liam for kissing Hope (Annika Noelle) and causing strife, but he’ll ultimately turn all his anger toward Bill. Ridge will try to get Liam just as riled about this “Still” wedding. He may argue that if Liam gives up, he’ll be letting Bill win.

Ridge will also mention Kelly and the looming family drama. He’ll undoubtedly remind Liam of his father’s tight grip. If Liam doesn’t put a stop to this, Bill will inevitably push his son out of the picture. Ridge won’t think Liam wants to live his life on the outside. Kelly is Liam’s daughter, so Ridge will urge him to be protective. He’ll contend that Bill has no business raising this child.

Ridge will want Liam to remember the great love he shares with Steffy as well. Liam has feelings for Hope, but Ridge will believe his feelings for Steffy are stronger. The Bold and the Beautiful spoilers say Ridge will rev up the pressure and hope that he stirs something inside Liam. He’s counting on Liam to fight!

Liam already delivered a desperate plea to Steffy, but he’ll be convinced to make another attempt. Unfortunately, Bill will have a quickie wedding in the works. If Liam wants to stop this marriage, he’ll have to act fast! Liam will plan to rush to Steffy’s side, but some snags could get in his way. B&B buzz hints that he may not make it in time to prevent the nuptials.

Of course, Liam’s speech probably wouldn’t have changed the outcome anyway. The Bold and the Beautiful spoilers say things are only going to get messier for Liam, Hope, Steffy and Bill. These four will continue to drive thie storyline in surprising directions.

Are you glad Steffy’s with Bill now or should she give Liam another shot? What do you want Steffy’s future to look like? We’ll give you updates as other B&B news comes in. Stay tuned to the CBS soap and don’t forget to check CDL often for the latest Bold and the Beautiful spoilers, updates, and news.