The Bold and the Beautiful Spoilers: Liam the Shooter After All, Truth Finally Revealed – Bill and Taylor Hide the Bombshell? 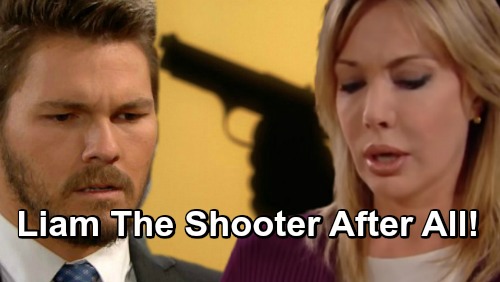 The Bold and the Beautiful (B&B) spoilers tease that the CBS soap could have a few tricks in store. B&B fans will recall that Liam (Scott Clifton) once believed he was behind Bill’s (Don Diamont) shooting. He was a mess as he battled guilt over the incident, but everything changed thanks to Taylor’s (Hunter Tylo) shocking claims.

Now B&B has revived the storyline through Taylor’s spreading secret and unhinged outbursts. However, how can we really know for sure that Taylor’s guilty? Liam had some false memories due to a head injury – or so it seemed. What if those memories were real after all? Perhaps off-her-rocker Taylor is the one who doesn’t have the story straight.

Since Taylor is clearly unwell, there’s no guarantee her mind has a firm grip on this. She doesn’t seem to have a firm grip on anything else! It’s possible Taylor went to Bill’s place to shoot him and saw Liam do the deed first. Her brain could’ve twisted that into some alternate reality for herself.

At the very least, witnessing the ordeal would’ve been incredibly traumatic. Taylor could’ve easily had some sort of mental break that made her confuse her goal with her actions. Maybe Taylor’s grappling with guilt and fear for no reason!

Liam’s been adamant that Taylor shouldn’t be around Kelly or his other daughter, who’s coming soon. He may not realize he’s criticizing Taylor over something he did himself. That’d be a real punch to the gut for Liam, who apparently thinks he’s the moral compass of Los Angeles.

Soaps like to use hypnosis from time to time, so that’s one option to consider. Then again, the truth could click into place another way. Regardless, Taylor might remember that Liam was to blame. She may even be able to prove it if she recalls evidence from that night.

That might lead Taylor back to Bill for another confrontation. Could Bill already know that Taylor’s innocent? Perhaps that’s why Bill’s been so keen on keeping quiet about Taylor’s crime. He may be protecting his son from the pain of knowing what he did. B&B’s been reestablishing the bond between Liam and Bill lately, so it makes sense to go for this angle.

The Bold and the Beautiful spoilers say we’ll see a huge shift in this story down the road. Will Taylor suddenly find herself on the other side of the secret? Will she protect Liam if he’s responsible for the shooting? We’ll give you updates as other B&B news comes in. Stay tuned to the CBS soap and don’t forget to check CDL often for the latest Bold and the Beautiful spoilers, updates, and news.