The Bold and the Beautiful Spoilers: Liam Vows to Win Steffy Back from Bill, Fights for Their Family – Hope Loses Again 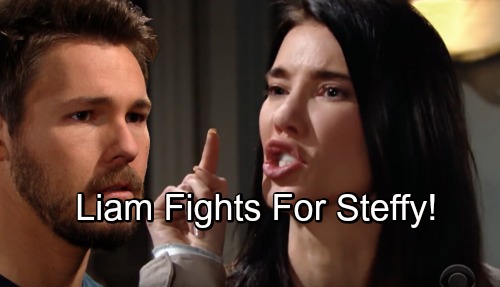 The Bold and the Beautiful (B&B) spoilers tease that Liam (Scott Clifton) will struggle with major regrets. He’ll feel deep remorse over what Steffy (Jacqueline MacInnes Wood) witnessed, but Brooke (Katherine Kelly Lang) will think it was for the best. She won’t see why Liam and Hope (Annika Noelle) should deny their true feelings for each other.

Hope will battle guilt as well, but her mom will give her the same spiel. Brooke will just want “Lope” to see that they’re meant to be. There’s a good chance Hope will eventually see the perks of all this. Since Steffy’s on the verge of reuniting with Bill (Don Diamont), Hope may feel like things are going to work out for everyone. She might believe this will eliminate Liam’s other option and simplify his choice.

However, this could be an unfortunate twist of fate after all. B&B fans know Liam typically wants what he can’t have. He has no concept of real love or loyalty. Will jealousy strike when Steffy and Bill get together? You’d think Liam would be angry on some level. Steffy’s most likely going to marry the man she cheated with. The fact that he happens to be Liam’s father makes this even worse.

Of course, Bill also stalked Steffy for months. His visit near the end of Steffy’s pregnancy could’ve caused a true disaster. Steffy fell after slamming the door in Bill’s face, which could’ve put her daughter’s life at risk. Kelly was thankfully just fine, but it’s clear Bill’s fixation went too far. Many Bold and the Beautiful viewers were fed up at the time.

Liam will wonder how Steffy could be with Bill after everything that’s happened. Nevertheless, it looks like Bill will get the bulk of his anger. Liam will undoubtedly think Bill’s exploiting Steffy’s pain as usual. Now that Kelly’s in the picture, Liam should take a softer stance toward her mother. He may view Steffy as a victim, especially since he drove her to Bill by locking lips with Hope.

Before that, Liam’s kiss with Sally (Courtney Hope) did the same thing. He may begin to see that he’s the problem here. Between Liam’s envy and his desire to make this right, Hope may not stand a chance. Liam may toss her aside and fight for Steffy with everything he’s got!