The Bold and the Beautiful Spoilers: Lope Wedding Brings Terrible Tragedy For Steffy

BY hellodrdavis on May 23, 2018 | Comments: one comment
Related : Soap Opera, Spoiler, Television, The Bold and the Beautiful 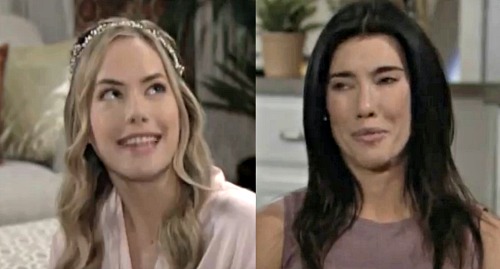 The Bold and the Beautiful spoilers tease that Liam (Scott Clifton) and Hope’s (Annika Noelle) wedding is going to be full of drama. This wedding is marching on full steam ahead, despite Ridge’s (Thorsten Kaye) and Steffy’s (Jaqueline MacInnes Wood) desperate attempts to talk some sense into Liam.

We’ve seen Brooke (Katherine Kelly Lang) busy planning the wedding and constantly gushing about how wonderful the day will be and how nothing’s going to go wrong. Uh oh. On soaps, those words mean that something’s definitely going to go wrong. The Bold and the Beautiful spoilers say that we can expect several bombshells at the nuptials to put a damper on Lope’s big day.

First off, there’s Wyatt, who has been struggling with terrible guilt over withholding the truth about Bill’s (Don Diamont) deception. Wyatt’s got pressure coming at him from all sides. Both Bill and Katie (Heather Tom) want Wyatt to keep the truth from Liam and play along with the idea that Steffy and Bill are still an item. The Bold and the Beautiful spoilers say that Wyatt will stop the wedding ceremony to pull Liam aside for a private chat while wedding-goers whisper and wonder what’s going on.

But will Wyatt actually get to tell Liam the truth about Bill’s deception? Their conversation just might be interrupted by some horrifying news. The Bold and the Beautiful spoilers say that Steffy is going to take a tumble, and B&B buzz is that she may fall while trying to hang a picture of herself and Liam at the beach house. We may see Lope’s wedding be interrupted a second time by the news of Steffy’s accident and that the she and the baby are in trouble!

Steffy will surely end up in the hospital, so does that mean Liam will leave the wedding (and Hope) and rush to Steffy’s side? That would be plenty of drama right there, but if Wyatt actually does tell Liam the truth before Steffy’s crisis is revealed, Liam may wrestle with some serious shock and guilt. After all, Steffy’s accident probably wouldn’t have happened if Liam had just believed her in the first place!

Will Steffy and the baby be okay? What will the future hold for Liam and Steffy after Liam learns the truth? And where will Hope fit into the picture? Stay tuned to the CBS soap and don’t forget to check CDL often for the latest Bold and the Beautiful spoilers, updates, and news.