The Bold and the Beautiful Spoilers: Marital Problems For Eric and Quinn – Couple Feuds Over Sally

BY hellodrdavis on June 20, 2018 | Comments: one comment
Related : Soap Opera, Spoiler, Television, The Bold and the Beautiful 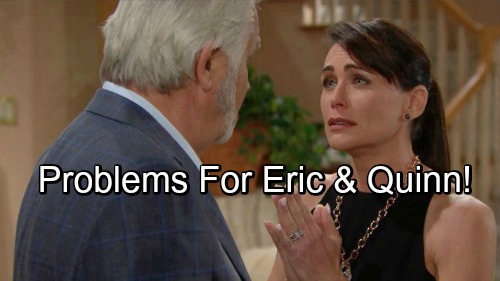 The Bold and the Beautiful spoilers tease that Eric (John McCook) and Quinn (Rena Sofer) are in for some trouble ahead. These two have enjoyed marital bliss ever since Eric forgave Quinn for making out with Ridge (Thorsten Kaye) a while back. But you didn’t think that Quinn could behave forever, did you? Some events are going to unfold that are bound to cause some tension between these two lovebirds.

It looks like the trouble is going to involve the return of Sally (Courtney Hope). The Bold and the Beautiful spoilers say that Eric and Quinn are going to catch Sally and Wyatt (Darin Brooks) in a passionate embrace. This will come as quite a shock for Quinn, who is pathologically predisposed to dislike whoever Wyatt is seeing. Quinn will probably instantly hate Sally on principle.

Plus, Quinn is very protective of Eric and she may not like the fact that Sally was involved in stealing designs from Forrester in the past, so that could lead her to dislike Sally even more. It would be just like Quinn to start meddling in Wally’s relationship and try to alienate Wyatt and Sally. This could worry Eric, who would probably hate to see his wife go back down that dark path.

Speaking of Eric, he will make a move that may get Quinn bent out of shape. The Bold and the Beautiful spoilers say that Eric will go against everyone’s wishes and offer Sally a job at Forrester. This could certainly infuriate Quinn, who will now have to work with (and be civil to) Sally on a daily basis. This could prove to be quite difficult for Quinn!

All of this could put stress on Eric and Quinn’s marriage. Eric won’t like seeing Quinn’s overly protective mother side coming out again, and Quinn won’t like it that Eric is putting her face to face with Sally every day. It’s just the sort of tension that could smolder and lead to a bigger marital crisis.

Will Sally end up causing trouble for Eric and Quinn? Stay tuned to the CBS soap and don’t forget to check CDL often for the latest Bold and the Beautiful spoilers, updates, and news.