BY Heather Hughes on March 30, 2018 | Comments: one comment
Related : Soap Opera, Spoiler, Television, The Bold and the Beautiful 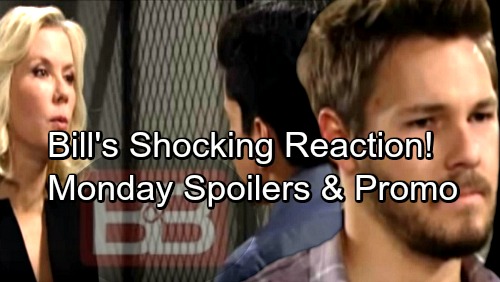 The Bold and the Beautiful (B&B) spoilers for Monday, April 2, tease that Bill (Don Diamont) will face a dilemma he never expected. Liam (Scott Clifton) just stopped by Bill’s hospital room and blurted out that he’s the shooter. He’ll soon have a chance to explain how it all went down.

Liam will admit he hit his head and had no idea what he’d done. His memories have only recently rushed back to him. Bill will express some doubt, so Liam will reveal more evidence. He’ll note that he found sheepskin gloves in his car. Liam will suggest that they’re just like the ones Detective Sanchez (Jeremy Valdez) mentioned. 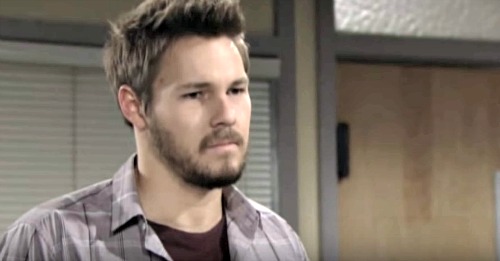 Once Liam convinces Bill that he fired the shot, he’ll let him know how sorry he is. Liam had a head injury and couldn’t think straight. He can’t comprehend how he could ever bring himself to pump a bullet in his father’s back. Nevertheless, that’s exactly what Liam did. He’ll wonder what Bill intends to do about it.

B&B fans know that Bill accused Ridge (Thorsten Kaye), which led to an arrest. Liam will obviously want Bill to change his story and get Ridge off the hook. However, that’ll leave the cops scrambling to find the true culprit. Some new proof could easily point them in Liam’s direction soon enough.

Still, the real dilemma will be whether Bill’s going to hold a grudge or give Liam a pass for his actions. It’ll probably be the latter since Liam wasn’t in his right mind at the time. The Bold and the Beautiful spoilers say Liam will be a mess as he pours his heart out to Bill. It should be easy for Bill to see the remorse in his son’s eyes.

Elsewhere, Brooke (Katherine Kelly Lang) will continue her efforts to free her husband. She’ll tell Detective Sanchez that Bill would love to see Ridge in jail. Brooke will argue that Bill’s letting his hatred for Ridge get in the way of justice. She’ll push Sanchez to grill Bill once again and focus on what he actually saw. Brooke will bet that Bill didn’t see Ridge or anyone else for that matter.

Meanwhile, Steffy (Jacqueline MacInnes Wood) will feel confident that Liam can sort this out for Ridge. Little does she know that Liam’s the shooter! Ridge will indeed score his freedom later this week, April 2-6, but Liam could end up on the hot seat eventually.