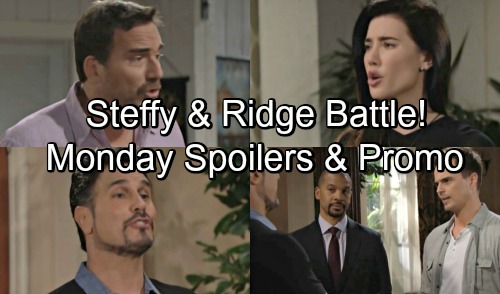 The Bold and the Beautiful (B&B) spoilers for the Monday, July 30, tease that Ridge (Thorsten Kaye) will want an explanation from Steffy (Jacqueline MacInnes Wood). Thanks to Wyatt (Darin Brooks), Ridge knows that Steffy gave up on Liam (Scott Clifton) and chose Bill (Don Diamont). He obviously doesn’t approve, so he’ll confront Steffy and hope he can put an end to all this.

Ridge will get why Steffy’s angry with Liam. However, he won’t understand how she could be with “Dollar Bill” Spencer. Ridge may remind Steffy that Bill’s the reason for this nightmare. If he hadn’t manipulated the situation, Liam and Steffy’s reunion wouldn’t have gone off track. Hope (Annika Noelle) wouldn’t have gotten pregnant, so there wouldn’t have been a reason for Liam to waver.

Of course, B&B fans know how Liam is! He probably would’ve found some other excuse to drift toward his ex. Steffy may even point that out to Ridge. She can deal with a lot of drama in her relationship, but she at least needs a firm commitment. Bill can offer that, so she’ll stand by her choice to marry him. Steffy will suggest that Liam can be with the apparently irresistible Hope. She’s done!

Meanwhile, Wyatt will hope to stop the wedding as well. He’ll try several angles as he works to make Bill see the light. The Bold and the Beautiful spoilers say Wyatt will mention what’s at stake. Does Bill really want to destroy his bond with Liam forever? Wyatt will warn that a “Still” marriage won’t be forgiven.

Bill may contend that Liam will reunite with Hope and ultimately see that he was right. He’ll be convinced Hope is Liam’s future, so he’ll expect gratitude eventually. If Bill’s wrong, that’s a sacrifice he’s willing to make. Bill will insist that Steffy has to come first, so he can live with Liam’s resentment. Liam sealed his fate and now Bill’s going to seal his own.