BY Heather Hughes on November 26, 2018 | Comments: one comment
Related : Soap Opera, Spoiler, Television, The Bold and the Beautiful 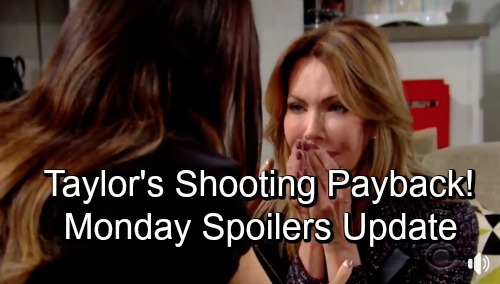 The Bold and the Beautiful (B&B) spoilers update for Monday, November 26, tease that Taylor (Hunter Tylor) will be haunted by some horrible memories. She shot Bill (Don Diamont) in a fit of rage a while back, but she ended up regretting it. With a little encouragement from Steffy (Jacqueline MacInnes Wood), Bill ultimately agreed to keep his mouth shut about Taylor’s crime.

Surprisingly, Bill has kept his word so far. B&B’s managed to keep a tight lid on this big secret, but Taylor will develop some worries on Monday. As she recalls that fateful night, Taylor will fear that her actions will still come back to bite her. Bill could turn Taylor over to the cops at any moment and that will absolutely terrify her. She just won’t trust Bill to stand by the promise he made.

Of course, Steffy will think Taylor’s just being paranoid. She’ll insist that Bill’s put that incident far behind him. After all, Bill’s already had another hospital stint since then! He was recently rushed to the ER after Ridge (Thorsten Kaye) shoved him off a balcony, but he let Ridge off the hook. Bill did the same thing after he found out Ridge influenced the judge, so he’s really trying to show he’s changed.

Steffy will make that clear to Taylor and hope that she can calm her down. She won’t think it’s good for her mom to worry herself into a panicked state. The Bold and the Beautiful spoilers say Taylor will remain upset about all this, so she’ll cause trouble all week long. Bill will get pretty fed up soon, which means Taylor’s own concerns may sabotage her!

Elsewhere, Liam (Scott Clifton) will be taken aback by Brooke’s (Katherine Kelly Lang) unshakeable faith. During their next chat, Brooke will assure Liam that Bill’s turned his life around. She’ll be completely certain of that. The Bold and the Beautiful spoilers say Liam may not share the same certainty, but he’ll admire Brooke’s belief in Bill. He’ll hope his father won’t let her down.

Bill’s determined to show only this side of himself and find a way to win Brooke over. Will he pull it off eventually? We’ll give you updates as other B&B news comes in. Stay tuned to the CBS soap and don’t forget to check CDL often for the latest Bold and the Beautiful spoilers, updates, and news.