BY hellodrdavis on October 22, 2018 | Comments: one comment
Related : Soap Opera, Spoiler, Television, The Bold and the Beautiful 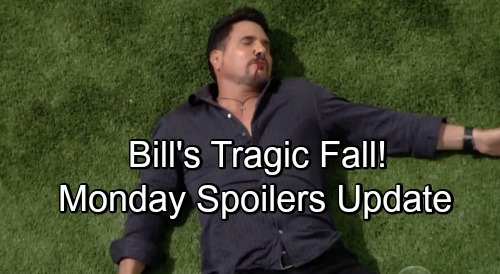 The Bold and the Beautiful spoilers for Monday, October 22, tease that the confrontation between Bill (Don Diamont), Thorne (Ingo Rademacher), and Ridge (Thorsten Kaye) will take a tragic turn. Ridge and Thorne arrived at Bill’s estate and promptly started making threats. Ridge is fed up with Bill going after Brooke (Katherine Kelly Lang), and Thorne wants to make sure that Bill treats Will (Finnegan George) right.

Things started on a lighter note, with Bill making jokes about Ridge and Thorne’s dressmaking capabilities, but on Monday’s episode, the confrontation will take a more serious turn. The insults will get more pointed, and the men will come to blows. B&B spoilers say that Bill will throw the first punch, and he’ll soon find that he’s overpowered by the Forrester brothers.

The fight will escalate and lead to the balcony, where Ridge and Bill will scuffle, and Bill will fall to the ground below as Ridge and Thorne look on. From there, Bill will be rushed to the hospital, and lifesaving measures will be taken to save his life. But was it an accident, or did Ridge intentionally push Bill?

Meanwhile, on the new B&B episode on Monday, October 22, Liam (Scott Clifton) and Hope (Annika Noelle) will continue their appointment with Dr. Phillips (Robin Givens). This is the big day when they find out the gender of their baby. They’ll be thrilled with the outcome, but mostly they’ll be happy to learn that their baby is healthy and strong. Will they have a girl or a boy?

A boy would be a nice balance for Liam, since he just had a girl with Steffy (Jacqueline MacInnes Wood). On the other hand, B&B might set up the next generation of female rivalry if Hope has a little girl who can eventually compete with Kelly (Gabriel Sporman). It will be interesting to see which direction B&B decides to go.