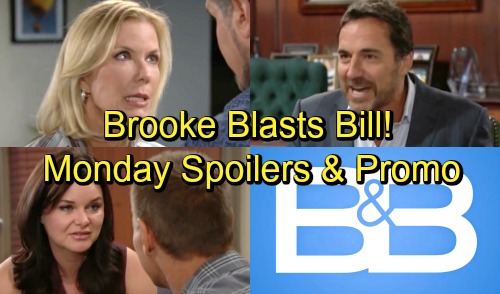 The Bold and the Beautiful (B&B) spoilers for Monday, September 17, tease that Brooke (Katherine Kelly Lang) will set Bill (Don Diamont) straight. He went in for a kiss after their tender moment, but Brooke will insist it was out of line. She’ll remind Bill that she’s a married woman and intends to stay that way. Brooke will glare as she makes it clear that Ridge (Thorsten Kaye) is her one and only.

Bill will apologize for pushing too hard. He’ll probably suggest that his emotions just got the best of him. Bill truly appreciates all the hard work Brooke’s putting in for him. She’s all he’s got in terms of support, so Bill will hope he can smooth things over.

Fortunately, it appears Brooke will agree to put this behind them. She’ll still believe Bill deserves to be a dad to Will (Finnegan George), so she’ll keep up the fight to help him. Of course, Brooke doesn’t have a great track record when it comes to sticking with one guy. It seems likely that “Brill” reunion’s going to happen eventually, so Brooke had better get used to the idea.

Other Bold and the Beautiful spoilers say Katie (Heather Tom) will give Thorne (Ingo Rademacher) an out. She’ll think it’s sweet that he proposed, but she won’t want him to feel obligated. Katie will argue that Thorne doesn’t have to marry her just so it’ll look good in family court. However, Thorne will offer plenty of reassurance. He’ll let Katie know that he truly wants to build a life with her.

Thorne will certainly include Will in his vision, too. He’ll promise Katie that he’ll be there for the boy and teach him everything he needs to know. Thorne will push Katie to say yes and begin their future together. B&B spoilers say Katie will finally be convinced, so they’ll dash off to Forrester Creations. Thorne and Katie will be anxious to share the big news with their loved ones.

Ridge will be thrilled when he hears about the engagement. He’ll realize it’ll boost Katie’s custody odds if she’s a united front with Thorne. Ridge will grin as he declares that the toothless dragon has been slayed. He’ll feel confident that Bill’s going down, so stay tuned to see if he’s right.