The Bold and the Beautiful Spoilers Next 2 Weeks: Jealous Hope Demands Liam Side Against Steffy – Reese and Brooke Face Off

BY Heather Hughes on December 10, 2018 | Comments: one comment
Related : Soap Opera, Spoiler, Television, The Bold and the Beautiful 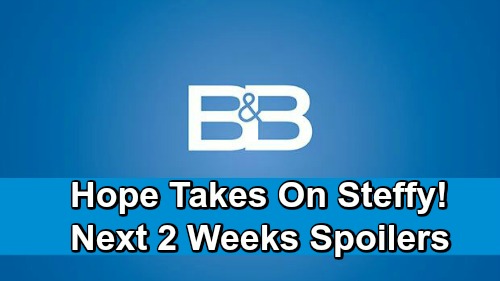 The Bold and the Beautiful (B&B) spoilers for the next two weeks tease that some battles are brewing. During the week of December 10-14, Taylor (Hunter Tylo) will once again be a source of contention for Liam (Scott Clifton) and Steffy (Jacqueline MacInnes Wood). It won’t be long until the war shifts over to Steffy and Hope (Annika Noelle), which will leave Liam scrambling to referee.

Brooke and Taylor will also have another showdown this week. B&B spoilers say Taylor’s continued presence will drive Brooke up the wall. When Brooke catches Taylor babysitting Kelly by herself, it’ll cause some serious hostility. Brooke will just want Taylor to take her unstable self elsewhere, but that’s not happening. Taylor will insist on making a more permanent move instead!

Over with Zoe (Kiara Barnes), she’ll clash with Reese (Wayne Brady) about his interest in Taylor. Zoe knows her dad’s a bit of a ladies’ man, so she’ll offer a warning. Zoe won’t want Reese charming Taylor and tossing her aside just as quickly. She’ll feel confident that Reese is just going to cause pain.

The Bold and the Beautiful spoilers say Reese will defend his Taylor obsession and continue his pursuit. They’ll share a steamy kiss this week, so this romance will heat up fast! Unfortunately, Reese will cramp his daughter’s style when he barges in on Zoe and Xander’s (Adain Bradley) close moment. It won’t be long until Tiffany (Maile Brady) comes along and causes a second interruption.

Brooke and Hope are on the same side in the Taylor drama, but they’ll still find a reason to clash this week. It’s best to keep the shooter secret contained, but the Logan women have been blabbing all over the place. Brooke will want to blab to the other Logan ladies as well. She’ll be tempted to fill Donna (Jennifer Gareis) and Katie (Heather Tom) in on Taylor’s dangerous actions.

Hope just won’t think that’s a good plan, especially when it could cause more friction between Liam and Steffy. Since Hope’s expecting Liam’s child and they’re preparing to blend their families, she’d rather cut down the conflict instead. At least that’s how Hope will feel initially! She’ll shift her view when she delivers an angry ultimatum during the week of December 17-21.

This ultimatum will involve Liam and what he’s going to do during the holidays. The Bold and the Beautiful spoilers say Liam will be forced to pick a side. It sounds like Hope won’t want Steffy monopolizing Liam’s time during Christmas. Hope absolutely wants Kelly to see her daddy, but there’s no need to be a holiday hog. She may push Liam to spread his love around.

Other Bold and the Beautiful spoilers say Reese will get riled up over Brooke’s actions. He’ll feel like she’s being far too harsh with Taylor, so he’ll order her to apologize. Of course, there’s no reason why Brooke should take orders from Reese! She might see things from his perspective and do it anyway, but there’s certainly no guarantee.

It sounds like some great scenes are coming up over the next two weeks. We’ll give you updates as other B&B news emerges. Stick with the CBS soap and don’t forget to check CDL often for the latest Bold and the Beautiful spoilers, updates, and news.