The Bold and the Beautiful Spoilers: Pam Distracts Quinn While Donna Models For Eric

BY hellodrdavis on December 4, 2018 | Comments: one comment
Related : Soap Opera, Spoiler, Television, The Bold and the Beautiful 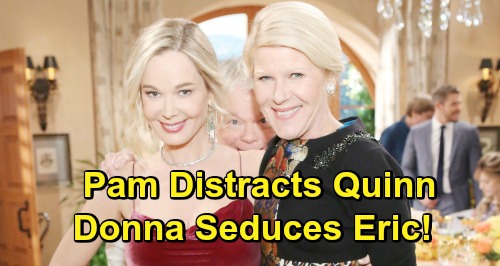 The Bold and the Beautiful spoilers tease that Pam (Alley Mills) is not giving up in her quest to eliminate Quinn (Rena Sofer) from Eric’s (John McCook) life. The big feud between Quinn and Pam died down a bit due to the Thanksgiving holiday, but Pam’s about to kick things back up again.

Pam’s convinced herself that life would be better all the way around if Donna (Jennifer Gareis) were Eric’s wife rather than Quinn. In Pam’s mind, if Donna were the Forrester matriarch, then Pam would be able to re-instate her engagement to Charlie (Dick Christie) and get married at the Forrester estate.

So, Pam’s going to instigate more collusion with Donna to get Eric to realize just what he’s missing by being with Quinn. Pam’s already got Donna hired as a receptionist at Forrester, and according to B&B spoilers, she’s going to make sure that Donna gets noticed by Eric.

Specifically, Pam will see to it that Quinn is distracted while Donna again models some sexy clothes for Eric. It will be the start of a larger plot to worm Donna into Eric’s life, but chances are, this won’t get past Quinn for long. Quinn’s pretty sharp, and she’ll be able to figure out what Pam and Donna are up to.

It probably won’t be long before Quinn starts actively fighting back. So far, Quinn has been relatively passive when it comes to Donna and Pam, with just words exchanged. But how long until Quinn starts being Quinn and the gloves come off? We could be looking at a nasty war between the ladies.

Who do you think will have the last laugh in this feud…Pam or Quinn? Stay tuned to the CBS soap and don’t forget to check CDL often for the latest Bold and the Beautiful spoilers, updates, and news.