The Bold and the Beautiful Spoilers: Raging Ridge and Thorne Put Bill in the Hospital – Showdown Goes Horribly Wrong 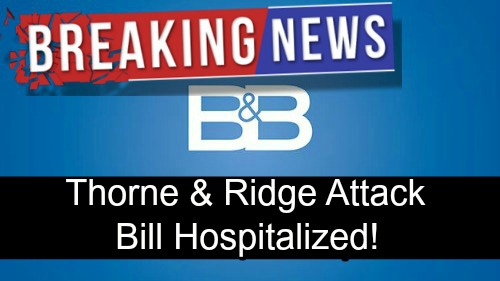 The Bold and the Beautiful (B&B) spoilers tease that Ridge (Thorsten Kaye) and Brooke (Katherine Kelly Lang) will set some catastrophic events in motion. Of course, Thorne (Ingo Rademacher) will play a role in the madness as well. All three of them will be key players in the drama ahead for Bill (Don Diamont).

The trouble began when Thorne started pushing Katie (Heather Tom) toward a custody fight. If it hadn’t been for his influence, Katie probably wouldn’t have taken things that far. That led to the court battle, which prompted Ridge to pressure Judge McMullen (Joe Lando). The custody issue also brought Bill and Brooke closer, so that’ll be a factor in what’s next.

Now that Brooke’s in the loop on Ridge’s dirty actions, the situation’s about to head downhill. We’ll see even more sparring for “Bridge” in the coming episodes. Brooke’s guilt will leave her vulnerable, too. She’ll hate keeping the truth from Bill, who’ll be struggling with some regrets.

After Steffy (Jacqueline MacInnes Wood) witnesses a “Brill” kiss and tattles to Ridge, it’ll leave him reeling. The Bold and the Beautiful spoilers say Ridge will crave revenge – as if he wasn’t craving it already! His dangerous desires will grow stronger, so B&B fans can expect a showdown.

Plus, Bill will find out about the custody case shocker soon according to The Bold and the Beautiful spoilers. Without Ridge’s intervention, Bill wouldn’t have lost his parental rights. There’ll be two ways for Bill to find out that bombshell. Thanks to Brooke, Katie will know and wrestle with what to do. Both Brooke and Katie could pose threats to Ridge’s secret.

If Bill learns what happened and prepares to take his enemy down, it could rev up Ridge’s anger even more. You can bet Thorne will be just as furious. He’ll want the custody arrangement to remain in place so he can be Will’s (Finnegan George) main father figure.

The Bold and the Beautiful spoilers say Ridge and Thorne will team up next week, October 15-19. They’ll decide it’s time to confront Bill, so a fierce faceoff is brewing. Thanks to a leaked script, we know that Bill will be hospitalized after a fight with Thorne and Ridge. It sounds like that confrontation is rapidly approaching.

Will one of the Forrester brothers go too far? It’s doubtful this will be a full-blown murder attempt, but Bill might claim it was when he wakes up. However, it could be a while before that happens. Bill could be seriously injured thanks to this incident, so a coma is certainly a possibility.