The Bold and the Beautiful Spoilers: Reese Baby Swap and Steffy Adoption Ruin Taylor – Brooke and Hope Get Revenge

BY hellodrdavis on December 30, 2018 | Comments: one comment
Related : Soap Opera, Spoiler, Television, The Bold and the Beautiful 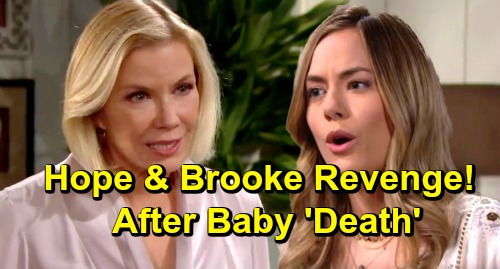 The Bold and the Beautiful spoilers tease that Brooke Forrester (Katherine Kelly Lang) and Hope Spencer (Annika Noelle) won’t keep quiet about Taylor Hayes (Hunter Tylo) shooting Bill forever. The two have agreed to keep Taylor’s horrible act quiet and not turn her in to Detective Alex Sanchez (Jeremy Ray Valdez) for now, but how long will they be willing to keep this information private?

Chances are, they won’t be willing to keep Taylor’s secret for the long term. They’re already hyper-concerned about Taylor’s mental stability, plus some events are about to transpire involving Hope’s baby that will likely make Brooke and Hope ultimately want some serious revenge on Taylor.

So, how could this all play out? Well, first off, it’s looking more and more like Dr. Reese Buckingham (Wayne Brady) is going to have nefarious plans for Hope’s new baby, Beth Spencer. Reese is in a world of trouble due to his $200,000 gambling debt, and he’s got a thug following him around and threatening his daughter Zoe Buckingham (Kiara Barnes).

Reese knows how much new babies go for on the black market, and he could easily score a big payday by selling off Hope’s new baby to the highest bidder. That would allow him to pay off his gambling debt and protect Zoe. But if he does this, then he’ll have to lead Hope to believe that baby Beth has died or been abducted. That will leave Hope devastated.

The other critical part of this story is that Steffy Forrester (Jacqueline MacInnes Wood) is looking to adopt a baby right now, and Reese knows it. There’s a very real possibility that Reese, knowing how badly Taylor wants Steffy to adopt a sister for Kelly Spencer (Chloe Teperman), will offer the baby to Steffy. He may put forth a fake story about how the birth mother died and he happened to think that Steffy might want to adopt the baby.

Of course, if this all happens and Steffy adopts Hope’s baby, then it will only be a matter of time before Taylor puts two and two together and figures out that Reese may have duped everyone and given Hope’s baby to Steffy.

Taylor’s pretty sharp, and she’ll probably remember giving Reese tidbits of information about Steffy wanting to adopt and her great desire for Kelly to have a sister.

But what will Taylor do once she figures out what’s happened? There’s a good chance that she’ll be conflicted but keep the sordid story to herself. After all, she’ll be seeing Steffy happy and content with two babies – something she very much wants for Steffy. Plus, in Taylor’s mind, she’ll think that there’s a chance that Liam Spencer (Scott Clifton) might come back to Steffy now that Hope doesn’t have a baby to “keep” Liam.

Of course, if Taylor keeps the secret of what Reese has done and allows Hope to continue thinking that her baby has died, there’s no way that the secret will stay hidden forever. B&B spoilers say that Ridge Forrester (Thorsten Kaye), Liam, and Bill Spencer (Don Diamont) will all be very suspicious of Reese after Hope’s baby “dies,” and they’ll probably not let up on Reese anytime soon.

Eventually, the truth will come out, and when it does, it will likely be revealed that Taylor knew that Hope’s baby lived and Steffy adopted her, and that will cause a major war between Brooke and Taylor. And if that doesn’t make Brooke or Hope go to the police and spill the beans about Taylor shooting Bill, then nothing will!

Brooke especially would be more than happy to get revenge on Taylor by turning her in for Bill’s shooting. It’s hard to imagine anything stopping Brooke from making Taylor pay for leading Hope to believe that Baby Beth had died.

What do you think? Will Brooke and Hope ultimately get their revenge on Taylor by putting her away for shooting Bill? Stay tuned to the CBS soap and don’t forget to check CDL often for the latest Bold and the Beautiful spoilers, updates, and news.