The Bold and the Beautiful Spoilers: Ridge and Brooke Conflict Breaks Out Over Steffy and Hope 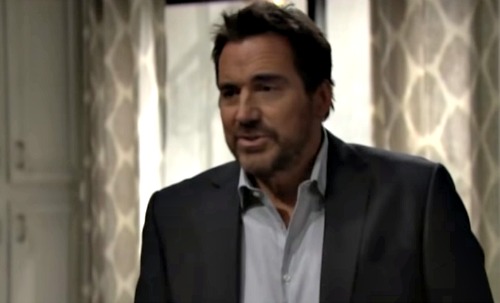 The Bold and the Beautiful spoilers tease that Brooke (Katherine Kelly Lang) may have needlessly opened a door in Los Angeles. Her unilateral decision to endorse Hope’s (Annika Noelle) plan to have Liam (Scott Clifton) move into the guest house was calculated. Brooke surely knew that Ridge (Thorsten Kaye) wouldn’t approve.

Brooke made that choice in the best interests of her daughter. Her thoughts weren’t based on what might be best for Ridge’s child. That decision may actually be what’s best for all involved, but Ridge doesn’t see it that way right now.

Steffy (Jacqueline MacInnes Wood) is, of course, Ridge’s daughter. She’s also Liam’s wife and the mother of their expected summer-born daughter. By choosing to side with Hope, who’s offered open expressions of love for Liam, Brooke has made her first marital misstep.

Seasoned B&B viewers are right to cite Brooke’s many nuptials, including multiple-time ceremonies to Ridge. So this so-called first misstep means it’s the initial time Brooke has done something wrong within Bridge’s current remarriage.

Hope claimed that she wanted Steam to stay married after arriving from Europe. Whether that was true, or not can’t be known. However, Liam’s one-time love changed her view as soon as she learned that Steffy slept with Bill (Don Diamont). That made logical sense, as Steffy’s track record is spotty and she was romantically linked to Bill in the past. Combine all factors and Hope understandably felt that Liam would be better off without his current wife.

But Liam is also the most wishy-washy character on the show, if not in all of daytime. He was swept away by Sally’s (Courtney Hope) plight and subsequent fight with his father last year. That led to Steffy bolting from the cliff house when she learned he’d kissed Sally while they were surrounded by Spectra Fashion’s rubble.

Liam’s choice to move onto his former love interest’s property comes with an interesting caveat. Since he hasn’t filed the annulment papers, Ridge, is still his father-in-law.

Ridge has therefore gained greater access to Liam and will continue attempting to convince his son-in-law to return to Steffy. Meanwhile, JMW’s character would be wise to become a frequent visitor at Liam’s new living space. Time apart from her would mean more one-on-one encounters with Hope, which likely would result in a sequel to Lope.