The Bold and the Beautiful Spoilers: Ridge Spotted Quinn at Bill’s House – Bridge Collapses Due to Confession? 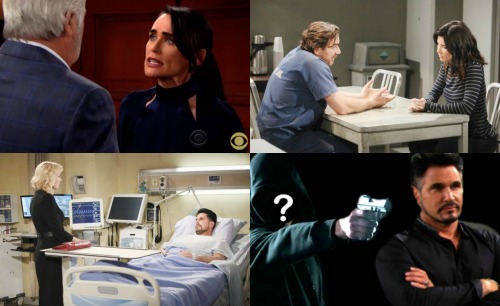 The Bold and the Beautiful spoilers tease that Ridge (Thorsten Kaye) isn’t thinking straight. It’s hard to blame him, considering his incarcerated state. However, choosing to sacrifice himself so that Quinn (Rena Sofer) doesn’t face trouble is deeply misguided.

Bridge formed after Ridge and Brooke (Katherine Kelly Lang) rediscovered their love, found their way back to each other, realized they were each other’s soul mates, or however one wants to tag this on-again relationship. Ranking with the most repetitious B&B re-pairings, it initially appeared as though Bridge’s umpteenth remarriage wiped away any possibility that Ridge would allow himself to be linked to Quinn again, yet he’s just done that again. But why?

There is no evidence, other than Bill’s (Don Diamont) emotional claim, that Ridge did anything to Bill. As a matter of fact, Ridge was assaulted by his longtime nemesis on the night in question.

If he truly wanted to do it, Kaye’s character could file charges against Dollar Bill. Actually, that might be a wise course of action at this point. Pursuing that path would force Bill to provide a legal statement. Carter (Lawrence St. Victor) would need to become involved. It’s then likely that Ridge would be cleared as a suspect in Bill’s shooting.

Instead, Ridge has convinced himself that he should take the fall to protect Quinn. That appears to mean he still has feelings for her. But how can that possibly be when it’s patently obvious that Brooke was and remains the true love of his life? Some unknown fact must be in play that the audience isn’t aware of.

Speaking of the renewed Mrs. Forrester, she’s the one person who can likely talk sense into her husband. She needs to get through to him and possibly, to Bill, as he still respects her despite their divorce.

As for Quinn, she doesn’t have an alibi. Detective Sanchez (Jeremy Ray Valdez) is right to be suspicious of this particular suspect. Eric (John McCook) revealed, during questioning at Forrester Creations, that Quinn stepped out for a bit during the night Bill was shot.

Where was she? Is it possible that someone can vouch for her whereabouts, or maybe that’s the problem?

It’s reasonable to believe that Ridge may have spotted Quinn in, or around Bill’s house that night. He may think that she used the golden gun to shoot Bill in the back. That point, or a similar one, would fuel Ridge’s seemingly mystifying sacrifice of himself and defense of Quinn.