The Bold and the Beautiful Spoilers: Ridge Unhinged By Custody Dispute – Pushes Brooke Away – Marriage Crumbles

BY hellodrdavis on September 22, 2018 | Comments: one comment
Related : Soap Opera, Spoiler, Television, The Bold and the Beautiful 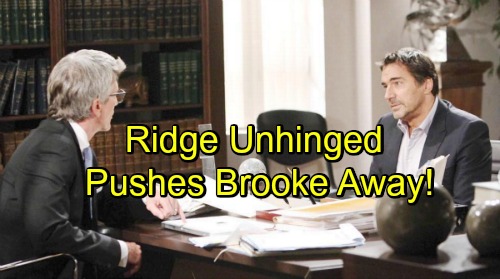 The Bold and the Beautiful spoilers tease that Katie (Heather Tom) and Bill’s (Don Diamont) custody drama has only just begun. The whole thing is going to take a toll on all parties involved, but it’s going to be particularly tough on Ridge (Thorsten Kaye) and Brooke’s (Katherine Kelly Lang) marriage.

“Bridge” have had differences of opinions before. They sharply disagreed about which of their daughters should end up with Liam (Scott Clifton), and about whether Hope’s (Annika Noelle) or Steffy’s (Jacqueline MacInnes Wood) lines should receive Forrester funding. But they seemed to overcome these disputes by taking an “agree to disagree” approach.

But the issue of Will’s (Finnegan George) custody really has them divided, and this time Ridge has gone off the deep end. He has a strangely intense desire to take Bill down, and he’s jumped headfirst into the middle of Katie and Bill’s custody dispute to do so. Ridge brazenly admits that he wants Bill to lose access to his son as payback for all the terrible things he’s done.

Ridge is in a really weird place right now. He gets wild-eyed when he talks about Bill and the custody dispute, and he completely rejects anyone else’s viewpoint on the subject unless they agree with him. He won’t even listen to Brooke’s rationale for her differing opinion, and he totally yelled at Steffy and Brooke when they tried to get him to see that he was behaving unreasonably.

So much for “agree to disagree.” If Ridge isn’t careful, he’s going to drive his loved ones away over this custody dispute. And his relationship with Brooke is going to truly suffer. Brooke is already turning to Bill to vent about Ridge’s behavior, which is recipe for disaster in itself. Unfortunately, it looks like Ridge will continue down his revenge path, which doesn’t bode well for Bridge’s marriage.

Do you think Ridge has totally lost it over this custody thing? Stay tuned to the CBS soap and don’t forget to check CDL often for the latest Bold and the Beautiful spoilers, updates, and news.