The Bold and the Beautiful Spoilers: Sally On The Warpath – Attacks Zoe For Setting Her Up 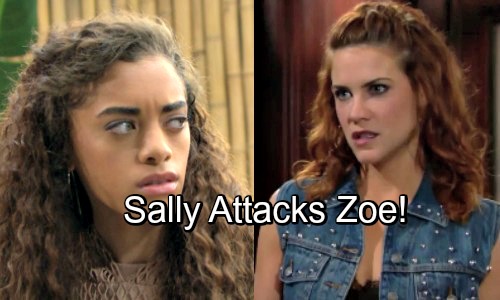 The Bold and the Beautiful spoilers tease that Sally (Courtney Hope) will be busy in the upcoming days. She’s just been accused of making threats against Hope (Annika Noelle) on the Hope For The Future website, and she’s desperate to clear her name.

Thorne (Ingo Rademacher) and Katie (Heather Tom) know that the threats came from Sally’s IP address, and they assume that Sally’s the guilty party and don’t think further investigation is necessary. But Sally knows she’s innocent, and B&B spoilers say that Sally will work on her own to find the guilty party. It shouldn’t take her long to put two and two together and figure out that the real culprit used her laptop to send the threats.

And from there, Sally will zero in on the only person besides Wyatt (Darin Brooks) who could have had some alone time with her laptop…Zoe (Kiara Barnes). Zoe’s been painting a mural at Wyatt’s place and she was present when Sally’s laptop briefly went missing.

Once Sally figures out that Zoe is the likely person who sent the messages, watch out. B&B spoilers say that Sally will go into an accusatory rage and lunge at Zoe! Wyatt will intervene and restrain Sally, so Zoe will be safe for now.

But Sally certainly won’t let this matter go, not when her reputation and her job at Forrester is at stake. Sally is determined to make this Forrester gig work out, and she may decide to take it on herself to figure out why Zoe would seemingly make threats against Hope. After all, she’s got to persuade Thorne and Katie that Zoe had motive to send the threats.

If Sally sleuths around enough, she may make the connection between Zoe and Xander (Adain Bradley). Xander could certainly shed some light on why Zoe would be making threats on the Hope For The Future Website. Of course, Zoe is Xander’s ex and is actually threatening Emma (Nia Sioux) since Emma is Xander’s new squeeze.

Will Sally put this all together and ultimately clear her name? Stay tuned to the CBS soap and don’t forget to check CDL often for the latest Bold and the Beautiful spoilers, updates, and news.