The Bold and the Beautiful Spoilers: Steam Ends – Still Wedding On The Way, Steffy Has Bill’s Baby

BY Sean O'Brien on July 22, 2018 | Comments: one comment
Related : Soap Opera, Spoiler, Television, The Bold and the Beautiful 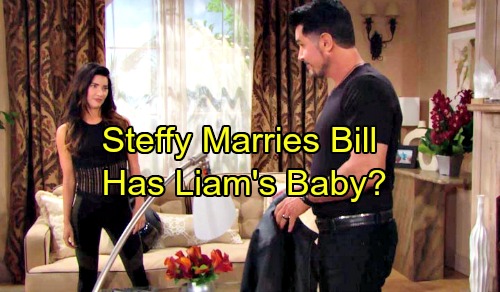 This time won’t be like years ago, when Steffy’s initial dalliance with Bill (Don Diamont) took place. It also won’t be like the one-off that happened in Eric Forrester’s (John McCook) guest house last fall. Oh no, this time ladies and gentlemen Dollar Still will begin again and then continue.

Will Steffy eventually acceded to Bill’s repeated wedding requests? Well, that depends on whether Kelly is his child, or, more likely, Steffy conceives Bill’s baby!

Consider the fight-back that’s in play in the projected storyline. Steffy hits back at Liam’s love for Hope by willingly having Bill’s child. Liam gains a third brother.

Bill has been telling everyone for months that Liam and Hope were destined to be together. Hope’s pregnancy greatly improved odds that Lope, which sounds far better than Hiam, will supplant Steam very soon. In fact, the couple that Liam and Hope formed may have already done that.

All who loathe Steffy call her names, relish every bit of angst that exists in her life, and wish negative things upon her. How many of those people refuse to acknowledge all the good she’s done, her defense of family, and the near-instant projection of calm that happened after Liam told her he was the father of Hope’s baby?

Those who love Steffy cast off what happened with Bill as a one-time mistake. It’s understandable that Ridge (Thorsten Kaye) would take that stance, but all else who do are underplaying the corrosive effect that willful incident fostered.

Yes, Steam, Lope, and Dollar Still aren’t easily explained. But is appears clear that either one, or two of those pairings will make it, as Liam will never be able to get Steffy, or Hope to accept a variance between both mother’s of his children indefinitely.

Assume that Steffy casts Liam off. The next logical step is Bill and Steffy having their own child. The man’s intent is not just to marry her, but to have his ideal woman become the mother of his children, plural. Dollar Still’s first baby would tie Steffy to Bill forever, which is what Diamont’s character fully intends.

Liam will not accept Bill and Steffy’s togetherness, which seems increasingly likely. Therefore, two couple appear likely to emerge. Lope and Dollar Still happen, rather than Steam surviving on its own. CDL is a leading source for everything linked to The Bold and the Beautiful. Check back regularly for B&B spoilers and news!