The Bold and the Beautiful Spoilers: Steffy and Wyatt Bond on the Job – Jealousy Erupts for Sally, Reignites Fierce Rivalry 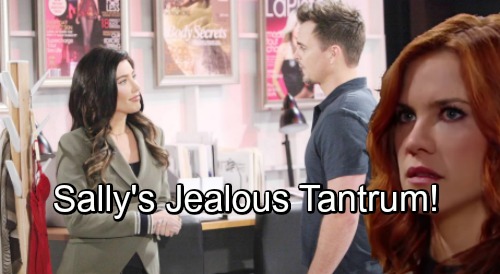 The Bold and the Beautiful (B&B) spoilers tease that Wyatt’s (Darin Brooks) new job will stir up some trouble. Steffy (Jacqueline MacInnes Wood) recently hired Wyatt as Forrester’s social media manager, so he’s eager to get to work. Sally’s (Courtney Hope) thrilled to know her beau will be close by. They’re still in the “can’t get enough of each other” phase, so this is great news for both of them.

However, you can bet this arrangement will bring drama down the road. B&B must have a good reason for letting Wyatt join the FC team. It’s not just because he can have plenty of office sex with Sally. The Bold and the Beautiful is surely setting up something big, but what? Since the majority of this show’s stories revolve around love triangles, they may be laying the groundwork for a new one.

After all, Wyatt is Steffy’s ex and Steffy is very single right now. Although Wyatt was hurt when Steffy divorced him and reunited with Liam, they didn’t part ways on bad terms. Liam (Scott Clifton) battled amnesia at the cabin with Quinn (Rena Sofer), but he naturally wanted Steffy back once he regained his memories. Wyatt undoubtedly understood why the “Statt” marriage didn’t work out.

Of course, Wyatt has a history with Hope (Annika Noelle) as well. She could be a possibility for him somewhere down the line, but her marriage to Liam isn’t going to crumble just yet. The Bold and the Beautiful spoilers say Steffy would be a better option since she hired Wyatt and is currently unattached.

This could reignite the rivalry between Steffy and Sally. If Steffy makes a move – or Sally thinks she’s making a move – it could bring some serious conflict. That’s not ideal since Sally wants to take her career to the next level at Forrester. She’s feeling great about her designs for the intimates line, but what happens when her personal life interferes with her professional one?

Jealous Sally might go crawling back to Hope and seek her as an ally, but that plan probably wouldn’t work. Hope would probably love to see Steffy and Wyatt together. It’d be insurance that Steffy would steer clear of Liam – at least for a while.

Wyatt and Steffy don’t seem to have as many fans as “Steam,” but they do have some supporters out there. Regardless, their reunion could make a decent filler story until The Bold and the Beautiful inevitably puts Steffy back with Liam. Would you be on board for another round of Steffy and Wyatt’s romance? Would you like to see Steffy and Sally battle it out for Wyatt’s heart?

It sounds like love will remain complicated on the CBS soap. We’ll give you updates as other details comes in. Stay tuned to B&B and don’t forget to check CDL often for the latest Bold and the Beautiful spoilers, updates, and news.