The Bold and the Beautiful Spoilers: Steffy Determined To Be Forrester’s Shining Star – Demands Hope Step Down 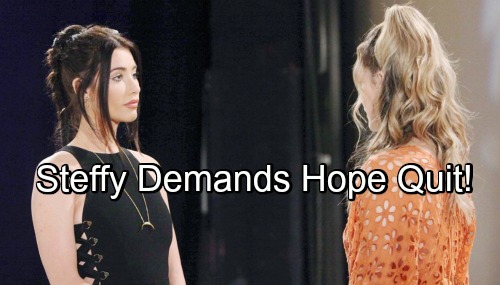 The Bold and the Beautiful spoilers tease that Steffy (Jacqueline MacInnes Wood) is in for a big fight at work, and it will have everything to do with Hope (Annika Noelle). But this time, they won’t be fighting over Liam (Scott Clifton). Instead, they’ll be fighting for the future of their respective clothing lines.

Steffy just brought back The Intimates Line at Forrester, and so far, it’s looking great. It features sexy designs and hot models, and Steffy thinks it’s the perfect, edgy wave of the future for Forrester. But Hope’s got her Hope For The Future (HFTF) line, and it has gotten great reception in the press.

But B&B spoilers say that Forrester will only be able to back one line going forward, so either The Intimates Line or HFTF is going to go. Ridge (Thorsten Kaye) will have to decide on one line or the other, and someone’s going to be left out in the cold.

Both Hope and Steffy are going to fight for their lines, but B&B spoilers indicate that Steffy’s really going to dig in and make sure that her line isn’t the one that gets cut. For Steffy, the Intimates Line is more than just a clothing line; it represents her getting back on her feet and choosing herself over a man.

The Intimates Line is all about Steffy’s strength and her belief in herself, and she’s going to be determined that Hope is not going to take that away from her. Steffy will show her fighting spirit to Ridge, when she makes it absolutely clear to him why The Intimates Line should prevail and get Forrester backing.

Steffy’s also going to have a major argument with Hope over the situation, during which she’ll boldly ask Hope to step down and take HFTF out of the fight. Steffy might even suggest that Hope remove HFTF from the competition to avoid embarrassment when The Intimates Line inevitably wins!

It looks like Brooke (Katherine Kelly Lang) will get involved in the situation on Hope’s behalf, as B&B spoilers say that Hope and Steffy will also get into a heated argument. But knowing Steffy, she won’t back down and all the opposition will galvanize her and make her fight even harder for her line.

Do you think Steffy’s efforts will work, and Ridge will choose The Intimates Line? Stay tuned to the CBS soap and don’t forget to check CDL often for the latest Bold and the Beautiful spoilers, updates, and news.