The Bold and the Beautiful Spoilers: Steffy Falls Hard for Bill, Thrilled Over Her Choice – Liam Pines as ‘Still’ Love Grows

BY Marcy Cohen on July 31, 2018 | Comments: one comment
Related : Soap Opera, Spoiler, Television, The Bold and the Beautiful 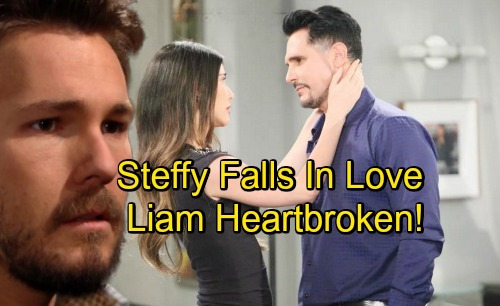 The Bold and the Beautiful (B&B) spoilers tease that Bill (Don Diamont) and Steffy’s (Jacqueline MacInnes Wood) relationship will move forward. After everything that she’s been through with Liam (Scott Clifton), Steffy just isn’t sure she believes in love anymore. She thinks it’s just some fairytale that people are kidding themselves about.

That’s why Steffy was so willing to jump right in with Bill. He’s been begging to get together for weeks, so it’s not like this is all that sudden anyway. Steffy knows exactly what she’s doing. She views this as both a business arrangement and a plan to take care of her daughter.

Bill’s loaded and devoted! Those are two attractive qualities in a man. Steffy trusts that Bill won’t be drifting off in someone else’s direction, so she’s ready to take the leap. She’s accepted that true love isn’t in her future, but what if it is? Steffy shouldn’t be so quick to shut down that idea.

You can bet that Bill will dote on Steffy and Kelly in the coming weeks. He’ll want Steffy to realize that this is the real deal. Bill will think they can be the perfect couple and have a happy family. That’s certainly possible on The Bold and the Beautiful.

B&B characters tend to change their minds about their love lives pretty often. Steffy may be surprised by how quickly she falls for the man who destroyed her world. Bill’s to blame for most of Steffy’s problems, but he’ll be her knight in shining armor in this story. They’ll put the past behind them and concentrate on a better future.

The Bold and the Beautiful spoilers say a familiar spark will crackle for “Still.” Despite all the drama, Steffy is indeed attracted to her former father-in-law. That should make it even easier to win Steffy over. If Steffy realizes she truly loves him, Bill should really be on cloud nine.

Naturally, that’d leave Liam (Scott Clifton) even more heartbroken. He’ll have Hope by his side, but he’ll inevitably pine for Steffy. Liam always wants what he can’t have! How will Liam handle his growing sorrow? We’ll give you updates as other B&B news comes in. Stay tuned to the CBS soap and don’t forget to check CDL often for the latest Bold and the Beautiful spoilers, updates, and news.