The Bold and the Beautiful Spoilers: Steffy Living With Consequences of Betrayal – Liam Has Two Hot Options

BY Sean O'Brien on January 19, 2018 | Comments: one comment
Related : Soap Opera, Spoiler, Television, The Bold and the Beautiful 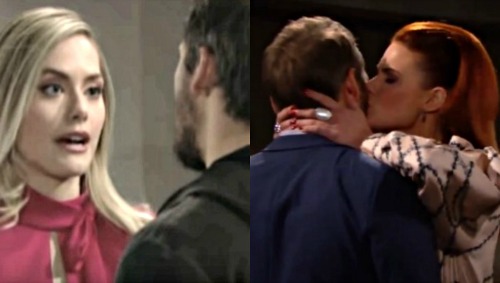 The Bold and the Beautiful spoilers document that Liam (Scott Clifton) made a wise decision. He took some time, assessed his risk and cut Steffy (Jacqueline MacInnes Wood) out of his life. The annulment decision he made was fully justified and now allows not one, but two hot romantic options to exist.

A few months ago Sally (Courtney Hope) made her very personal intentions known. Faced with the prospect of imminent death under the fallen rubble of her the Spectra Fashions building, she didn’t verbally say goodbye to Liam. Oh no, she kissed him on the lips, after which he returned her physical compliment.

Many men would love to have Miss Spectra as a backup babe plan. She hadn’t been on Liam’s romantic radar, regardless of what any of his detractors may claim. Clifton’s character was and is an honorable guy. He loved his wife and fully trusted her, until she decimated his view of reality.

All who chide Sally’s visual classification need to have their exaggerated emotions evaluated and then seek extensive therapy. Society won’t pay for derangement syndrome repair either, as free will actions created said intentionally stretched thoughts.

Now, back to Liam’s options. The smart and sassy owner of Spectra Fashions is fully appealing. Unlike Princess Steffy, she also didn’t wrong Liam by sleeping with his father. Never a secondary choice, Sally has actually positioned herself these past months as one of two solid options, either of which could be part of Liam’s future life.

Noelle’s presence in the cast revives a compelling character from the recent past. Liam will soon learn that one of his former love’s has returned, which will then give him a second, non-Steffy choice to consider.

Like Sally, Hope is single. She arguably has a leg up on Sally, as one of Liam’s former wives has a deeper connection to him. It must be said though, as many fans likely know through their own experience, that exploring life with a fresh mate can be more appealing as there is no baggage.

Assume one is Liam for a moment. Should he rush into a next pairing? No, that would be a rebound.

Instead, Mr. Spencer, who’s come to detest his last name, should allow personal connections to grow organically over time. That would meet his personal philosophy, while also allowing him a deeper period to evaluate himself. For he too must embrace some responsibility for all that occurred.

Yes, Sally and Hope are options. But just because they exist doesn’t mean that he has to take one, or that either lady will take him. CDL is a leading source for everything linked to The Bold and the Beautiful. Check back regularly for B&B spoilers and news!