The Bold and the Beautiful Spoilers: Steffy Sees A Shocking Scene – Puts Bridge’s Marriage In Jeopardy

BY hellodrdavis on October 2, 2018 | Comments: one comment
Related : Soap Opera, Spoiler, Television, The Bold and the Beautiful 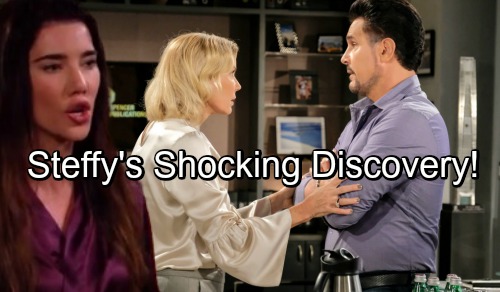 The Bold and the Beautiful spoilers tease that Steffy (Jacqueline MacInnes Wood) will witness something she’d probably rather not have seen, and it will have serious implications for Brooke (Katherine Kelly Lang) and Ridge’s (Thorsten Kaye) marriage. Steffy has thus far stayed out of Bill (Don Diamont) and Katie’s (Heather Tom) custody drama, but that may be about to change.

Brooke and Ridge have been on opposite sides of the custody case for weeks now, and they’re both keeping big secrets from each other about it. Brooke has been meeting secretly with Bill and working to bolster his case. She’s offered her moral support, too, and that even led Bill to plant a big kiss on her out of gratitude – something that Brooke would rather Ridge not know about.

For his part, Ridge has been acting inappropriately too. He’s unduly pressured the judge in the custody case, and that pressure will soon lead to a ruling in favor of Katie. Of course, he’d like to keep that under wraps from Brooke and everyone else.

Well, Steffy might witness a moment between her father and Judge McMullen (Joe Lando), or she might overhear a conversation between the two. If Steffy were to find out that Ridge compromised the fairness of the judge’s ruling, and she went to Brooke about it, it could certainly have a devastating effect on Bridge’s marriage. Brooke would probably feel compelled to tell Bill about it, and things would really blow up between Brooke and Ridge.

Or, Steffy might witness a moment between Brooke and Bill, perhaps after the custody hearing. Brooke and Bill might get together to commiserate about the ruling, and Bill may express his gratitude for Brooke’s testimony, perhaps with an embrace or another kiss. That would be explosive for Steffy to witness!

Whatever the case, Steffy is probably going to have a tough choice on her hands – to keep what she sees to herself, or to do something with the information. Given that it will end up putting Bridge’s marriage in jeopardy, it sounds like she’ll spill what she sees.

What do you think Steffy will witness that will be so bad for Bridge’s marriage? Stay tuned to the CBS soap and don’t forget to check CDL often for the latest Bold and the Beautiful spoilers, updates, and news.