The Bold and the Beautiful Spoilers: Steffy Underestimates Hope – Liam Sits On Fence

BY Sean O'Brien on July 17, 2018 | Comments: one comment
Related : Soap Opera, Spoiler, Television, The Bold and the Beautiful 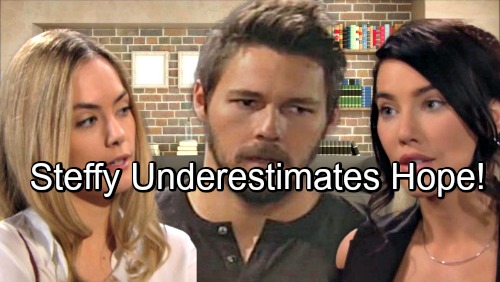 The Bold and the Beautiful spoilers tease that Steffy’s (Jacqueline MacInnes Wood) underestimation of the threat Hope (Annika Noelle) poses to her and Kelly’s future could easily lead to devastation. Meanwhile, Liam (Scott Clifton) has taken a spot on an emotional fence.

Liam sits directly above four lives, Steffy, Kelly, Hope, and Lope’s forthcoming child, that are tied to his. He loves the mother’s of both of his children and truly isn’t able to say which person he’ll choose.

Imagine a B&B world where neither lady is selected. Liam opts to remain unmarried to either person, thereby allowing him to not disappoint Steffy, or Hope. Only someone with Liam’s personality type would think that outcome possible, even though both of his so-called loves would likely disagree on that point. Neither character would be satisfied with that mamsy-pamsy choice.

Wyatt (Darin Brooks) offered insight that many B&B fans surely share. Liam has two women that love him, two women who are mothers to his children. Wow! Yes, it is quite the dilemma for this particular character.

Liam, more so than Hope, acted recklessly a short time back. He slept with her in Brooke’s (Katherine Kelly Lang) Lincoln log cabin without having taken precautions.

Why is Liam being chided as more responsible than Hope for the pregnancy they share? Well, he was already expecting a child with Steffy and knew that Hope was vulnerable.

Based upon her demeanor and statements, it appears as though Hope was not intentionally trying to get pregnant. At the time she had no idea that Liam would learn Bill (Don Diamont) was behind the Dollar Still ruse. So she wasn’t trying to trap Liam into fathering a baby with her in order to split him from Steffy. He’d already left her at that time.

However, feeding off her mother’s advice, Hope is now aggressively pursuing a future with Liam that would push Steffy out. The fact that Hope recently told Liam how she felt and now has said the same to Steffy seems to reaffirm that Hope didn’t scheme to become pregnant.

Steffy believes that Liam needs time, but will remarry her. Hope knows that Liam is living with Steffy and his born-daughter.

Liam could chose either woman and the child he has with her. With whatever his decision, or if he opts to not make one, his life and the lives of four other people will be impacted dramatically. CDL is a leading source for everything linked to The Bold and the Beautiful. Check back regularly for B&B spoilers and news!