BY hellodrdavis on September 17, 2018 | Comments: one comment
Related : Soap Opera, Spoiler, Television, The Bold and the Beautiful 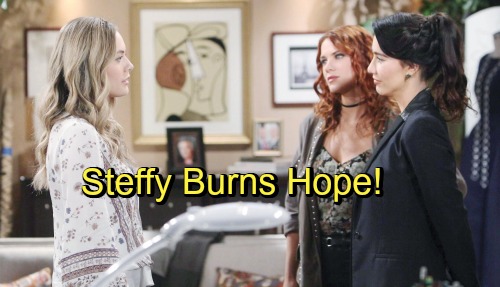 The Bold and the Beautiful spoilers tease that the punches will just keep coming for Hope (Annika Noelle) at Forrester Creations. For a while, she was Forrester’s golden child who reaped all the glory and praise. Her Hope For The Future (HFTF) re-launch was an astounding success, and she was on top of the world.

But that was during a time when Steffy (Jacqueline MacInnes Wood) was largely absent from her co-CEO duties at Forrester. Steffy was busy dealing with personal issues stemming from Bill’s (Don Diamont) efforts to keep her apart from Liam (Scott Clifton), and then Steffy was on a brief maternity leave.

Now, Steffy’s back to work, and Hope’s world has been rocked. Steffy is 100% committed to putting her energies into work, and unfortunately that means a startling new reality for Hope. Her HFTF line got seriously scaled back in favor of Steffy’s Intimates Line, and now a new situation with Sally (Courtney Hope) is starting to unfold.

When Sally came aboard at Forrester and was put to work on the HFTF line, Hope strongly objected. She took an instant disliking to Sally and relegated her to grunt work and kept her from designing for the line. Hope even told Sally that she’d never design at Forrester!

Well, once Intimates took the forefront at Forrester, Sally decided to seize an opportunity and approached Steffy about possibly designing for the line. Steffy responded favorably, but B&B spoilers say that Hope’s not going to be happy about this development. Hope’s likely going to feel undermined, especially since she previously told Sally that she’d never be a designer.

B&B spoilers say that Steffy and Hope will seriously disagree about exactly what Sally’s role at Forrester should be. Hope will continue to think that Sally’s untrustworthy and should be doing intern-level work, but Steffy will be impressed with Sally’s designs and will want to give her a chance to show her worth as a designer.

But while Hope may squawk about Sally being used as a designer, Hope doesn’t have the decision-making power that Steffy does. Steffy is co-CEO, and if Steffy wants Sally to design, there won’t be much that Hope can do about it. It looks like Sally will be able to use her designing talents at Forrester after all.

Do you think that Hope has a right to feel undermined by Steffy’s decision to let Sally design for Forrester? Stay tuned to the CBS soap and don’t forget to check CDL often for the latest Bold and the Beautiful spoilers, updates, and news.