The Bold and the Beautiful Spoilers: Taylor Freaks As Shooting Investigation Heats Up – Worries Bill Will Turn Her In

BY hellodrdavis on November 19, 2018 | Comments: one comment
Related : Soap Opera, Spoiler, Television, The Bold and the Beautiful 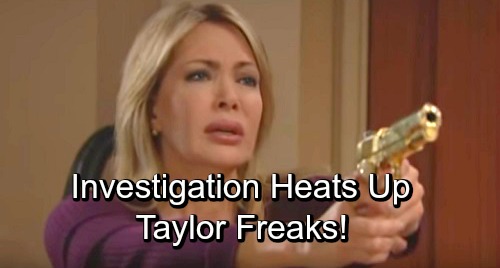 The Bold and the Beautiful spoilers tease that Taylor (Hunter Tylo) will soon be back on canvas and riled up about something that she thought was behind her. It’s been a while since Taylor shot Bill (Don Diamont) in the back for going after Steffy (Jacqueline MacInnes Wood). It’s something that nobody has given much thought to lately, but soon the issue will crop back up.

It seemed like Detective Sanchez (Jeremy Ray Valdez) might have let Bill’s attempted murder case go cold, but it appears that there will be renewed interest in solving the case. Perhaps Detective Sanchez got fired up after Ridge (Thorsten Kaye) and Thorne’s (Ingo Rademacher) altercation with Bill that ended with Bill falling from a balcony.

Or perhaps Detective Sanchez will discover a new clue in the case. Exactly what will renew his interest in the shooting remains to be seen, but it looks like he’ll be coming around again to question Bill about it. B&B spoilers say that both Detective Sanchez and Justin (Aaron D. Spears) will wonder why Bill doesn’t seem to want to solve his attempted murder.

Of course, the reason is that Bill promised Steffy that he wouldn’t turn her mother in. It was all based on Bill’s love for Steffy, and this all happened at a time when Bill was in his Steffy phase. But now that Bill has moved on from Steffy and seems fixated on Brooke (Katherine Kelly Lang), it stands to reason that he might become more willing to cooperate with Detective Sanchez and implicate Taylor in the shooting.

And that’s probably what’s going to be on Taylor’s mind when she comes back, especially if she finds out that Detective Sanchez is investigating the shooting again. As much as she hated Bill obsessing over Steffy, Bill’s love for Steffy did keep her out of jail. She’s probably wondering now whether Bill will change his mind and turn her in now that he’s not into Steffy anymore.

B&B spoilers say that Taylor will express her fears about Bill possibly turning her in to Steffy. Steffy will probably try to reassure her mom that Bill intends to keep his promise, but how can she be sure? Steffy may want to check in with Bill to make sure that he’s going to keep his mouth shut, because Taylor could be in big trouble if Bill decides to sing.

Do you think Bill will change his mind and give Taylor up? Stay tuned to the CBS soap and don’t forget to check CDL often for the latest Bold and the Beautiful spoilers, updates, and news.