The Bold and the Beautiful Spoilers: Taylor To Move In With Steffy – War Erupts Over Kelly’s Safety

BY hellodrdavis on December 11, 2018 | Comments: one comment
Related : Soap Opera, Spoiler, Television, The Bold and the Beautiful 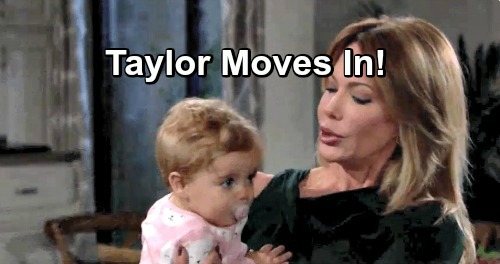 The Bold and the Beautiful spoilers tease that Taylor (Hunter Tylo) is about to make a major life decision. After all of the drama surrounding her stability and shooting of Bill (Don Diamont) earlier this year, Taylor will seriously consider leaving Los Angeles. There are so many people who seem to be against her that leaving will seem like the best option.

But Reese (Wayne Brady) will step in and ask Taylor to reconsider her decision to leave. Reese took an immediate liking to Taylor upon their first meeting, and it seems that he wants to get to know her better. Taylor will be happy to finally have someone on her side, and ultimately she’ll decide to stay in Los Angeles for the foreseeable future.

But Taylor will need to secure living arrangements in Los Angeles, and that’s where Steffy (Jacqueline MacInnes Wood) will come in. It will probably seem like a natural fit for Taylor to move in with Steffy. Steffy’s got plenty of room in the cliff house, and she’d love to have her mother there full-time. Plus, Taylor would love to spend more time with Kelly (Zoe Pennington).

Steffy and Taylor will be excited about the prospect of living together, but it looks like they’ll encounter some serious pushback from others about the matter. For one, Brooke (Katherine Kelly Lang), will become upset when she visits Steffy’s house and finds Taylor alone with Kelly.

And it looks like Liam is also going to get to the point where he doesn’t want Taylor alone around Kelly, either. This will put a big wrinkle in Taylor and Steffy’s planned living arrangement. After all, if Taylor is living with Steffy, she’ll naturally be around Kelly a lot, and there will be times when the two of them are alone together.

It sounds like there will be quite the opposition to Taylor having a big role in Kelly’s life. Do you think that Taylor poses a risk to Kelly? Stay tuned to the CBS soap and don’t forget to check CDL often for the latest Bold and the Beautiful spoilers, updates, and news.