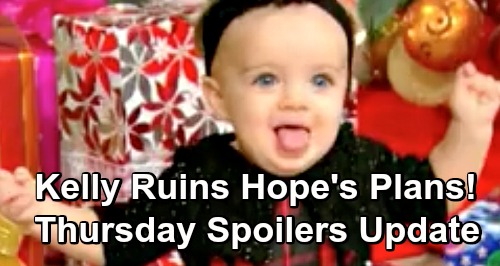 The Bold and the Beautiful (B&B) spoilers update for Thursday, December 27, tease that Hope Spencer’s (Annika Noelle) plans will go awry. Hope caught Liam Spencer (Scott Clifton) off guard with her babymoon suggestion, but she quickly sold him on the idea of a doctor-approved trip.

This is Hope’s chance to have Liam all to herself before Beth arrives and she intends to take advantage of it. Of course, Hope’s eager to put some distance between Liam and Steffy Forrester (Jacqueline MacInnes Wood) as well.

“Steam’s” connection is still strong, so Hope will want to strengthen the “Lope” bond on Catalina Island. Some romantic quiet time certainly couldn’t hurt. Too bad Hope and Liam will never get it! Their babymoon is about to be derailed by some startling hurdles.

The Bold and the Beautiful spoilers say the trouble will start with a call about Kelly Forrester (Zoe Pennington). It turns out little Kelly will come down with a fever, so Liam will want to help out.

Hope will be disappointed by the trip setback, but she’ll understand. She would want Liam to be there for their child in a situation like this, so she should urge Liam to be with Steffy and pitch in.

However, Liam won’t think they have to cancel their whole babymoon. He’ll contend that Hope should go ahead and fly over to Catalina Island alone. Liam will feel like he can resolve this Kelly crisis and join Hope once it’s all wrapped up.

B&B spoilers say Hope will agree to the vacation adjustment and press on. She’s really looking forward to this, so she won’t mind waiting.

At the airport, Hope will meet some fellow travelers. There’s an odd couple that always causes drama when someone’s taking a flight. Monica Horan and Jim O’Heir will once again play Kieran and Matt Cannistra, so expect them to make a scene of some sort. The Bold and the Beautiful spoilers say Hope will face an awkward chat with the duo before she heads on her way.

Over with Reese Buckingham (Wayne Brady), he’ll realize his gambling debt means danger for his daughter. Zoe Buckingham (Kiara Barnes) will be at risk thanks to the $200,000 that Reese owes.

He’ll panic as the thug revs up the pressure and threatens bodily harm to Zoe. If Reese can’t come up with the money, his daughter will pay the price for his mistakes. Reese’s back will be against the wall, so look for him to make some daring moves in the coming weeks.

We’ll give you updates as other B&B news emerges. Stay tuned to the CBS soap and don’t forget to check CDL often for the latest Bold and the Beautiful spoilers, updates and news.