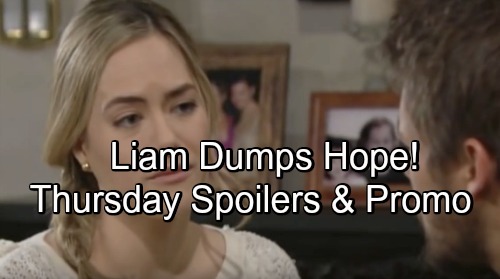 The Bold and the Beautiful (B&B) spoilers for Thursday, June 7, tease that Hope (Annika Noelle) will anxiously await Liam’s (Scott Clifton) answer. She just asked what the future holds for Liam, so he’s got a big decision to make. Does Liam want to stick with Hope or reunite with Steffy (Jacqueline MacInnes Wood)? His choice has been pretty clear from the second Kelly arrived.

Liam admitted that his priorities suddenly shifted. Everything’s about his daughter now. Liam wants to give Kelly the best life possible, but that means heartache for Hope. Since he still has plenty of love left for Steffy, Liam will think it’s best if he puts his family back together. He’ll gently explain his thought process to Hope and try to soften the blow.

Liam won’t like the idea of shuffling Kelly around from house to house. He’d rather be under one roof with Steffy and their little girl. Besides, Liam was prepared to get back together with Steffy before Bill’s (Don Diamont) manipulation. He may point out that he technically already made his decision, so he should stand by it.

Steffy made a huge mistake by sleeping with Bill, but she’s probably suffered enough at this point. Liam may believe he should set an example of kindness and forgiveness. He’ll want to be someone Kelly can look up to and he can’t do that if he bails on her mommy.

The Bold and the Beautiful spoilers say Brooke (Katherine Kelly Lang) will keep the faith while Liam dumps Hope. She’ll believe there’s still a chance for their future together, but this protective mom’s going to be disappointed. B&B fans can expect Brooke to console her distraught daughter soon.

In the meantime, Eric (John McCook) will also make a love triangle prediction. He’ll feel confident that “Steam” is the couple to root for. Eric will look at a picture of Kelly and note that she deserves a family. He’ll suggest that Liam would never forgive himself if he didn’t find a way to make that happen.