BY Heather Hughes on May 30, 2018 | Comments: 3 comments
Related : Soap Opera, Spoiler, Television, The Bold and the Beautiful 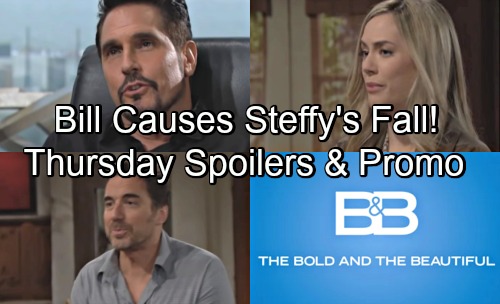 The Bold and the Beautiful (B&B) spoilers for Thursday, May 31, tease that Ridge (Thorsten Kaye) will grow increasingly frustrated with Brooke (Katherine Kelly Lang). She’s convinced that Steffy (Jacqueline MacInnes Wood) is Liam’s (Scott Clifton) past and Hope (Annika Noelle) is his future. Of course, Ridge will do everything he can to make Brooke see that she’s wrong.

Liam chose Steffy before Bill’s (Don Diamont) manipulation wrecked their reunion. Ridge won’t see why Steffy should be the loser of this love triangle. He’ll point out that they have to consider the baby, too. Ridge will feel certain this little one’s going to bring Liam and Steffy together. He’s right, but Brooke will remain in denial for her daughter’s sake.

Over with Hope and Steffy, they’ll argue about what’s best for their mutual love interest. Hope will also bring up some tough times in her history with Liam. She’ll blame Steffy for coming between them back then. Hope will suggest that maybe now Steffy understands how painful that was. She may imply that Bill’s trick was a dose of karma, but she’ll hate that Liam got hurt in the midst of it all.

At Spencer Publications, Liam’s stern lecture will turn into a raging tirade. He’ll really let Bill have it over his plot to win Steffy over. The Bold and the Beautiful spoilers say Bill will once again push for “Lope” and “Still.” He’ll think they can both be happy with the women they deserve, but that’ll just add to his son’s wrath. Liam may contend that any woman deserves better than Bill, especially Steffy.

B&B fans can expect Liam to offer a fierce warning. He’ll insist that Steffy wants nothing to do with Bill now. Liam will undoubtedly order his father to steer clear of her, but there’s no chance of that happening. In fact, Bill will head over to the cliff house right after this confrontation. He’ll want to see Steffy and explain that his scheme was done out of love.

The Bold and the Beautiful spoilers say Steffy will tell Bill to scram before slamming the door. She’ll be disgusted by the sight of him. Alas, an alarming twist will bring danger for Steffy and her child. She’ll slip during that door slam and the fall will cause early labor.

Some terrifying drama’s ahead for Steffy and Liam. We’ll give you updates as other B&B news comes in. Stay tuned to the CBS soap and don’t forget to check CDL often for the latest Bold and the Beautiful spoilers, updates, and news.