The Bold and the Beautiful Spoilers: Thursday, November 15 – Liam and Wyatt’s Will Time – The High Cost of Bill’s Silence

BY hellodrdavis on November 14, 2018 | Comments: one comment
Related : Soap Opera, Spoiler, Television, The Bold and the Beautiful 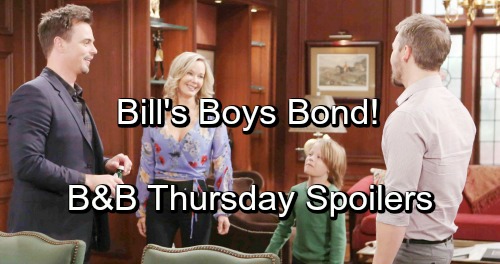 The Bold and the Beautiful spoilers for Thursday, November 15, tease that Bill (Don Diamont) will continue to toy with Ridge (Thorsten Kaye) and Judge McMullen (Joe Lando) about their custody conspiracy. Bill’s got the two men right where he wants them, and he’s perfectly happy to let them sweat it out.

But Brooke (Katherine Kelly Lang) has just stepped in with an emotional appeal to Bill. She has implored him to prove that he’s a changed man, as he claims. She’ll continue her appeal on Thursday’s episode, and Bill will probably take a good listen to what she has to say.

Bill trusts Brooke, and she’s the only one out of the whole conspiracy group whose opinion he truly respects. It looks like he’s going to go easy on Ridge and Judge McMullen and not turn over his evidence to the authorities. But will he have certain demands in return? He might just ask for shared custody to be reinstated and leave it at that.

It will be interesting to see exactly what Bill demands, but assuming he does grant Ridge and the judge leniency, it will be because of Brooke, and that’s going to really upset Ridge. Sure, Ridge will be thankful that Bill didn’t go to the cops, but he’ll also be keenly aware that Bill’s motive is to ingratiate himself to Brooke.

Meanwhile, on the new B&B episode on Thursday, November 15, the Spencer brothers will spend some quality time together. It’s been a while since we’ve seen Liam (Scott Clifton) and Wyatt (Darin Brooks) interact with Will (Finnegan George), but the three of them will hang out and enjoy each other’s company.

Liam and Wyatt will probably want to gauge Will’s relationship with Bill from Will’s perspective, so we’ll probably see the topic of Bill come up between them. It may do Liam and Wyatt good to know that their dad has really stepped it up and made a sincere effort to spend more time with his youngest son.