BY Heather Hughes on November 29, 2018 | Comments: one comment
Related : Soap Opera, Spoiler, Television, The Bold and the Beautiful 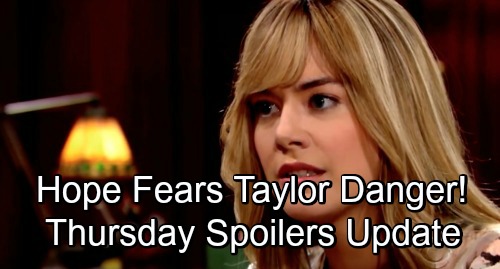 The Bold and the Beautiful (B&B) spoilers for Thursday, November 29, tease that Hope (Annika Noelle) will process Liam’s (Scott Clifton) startling news. He just admitted that Taylor (Hunter Tylo) was the one who shot Bill (Don Diamont), so Hope’s head will be spinning. She’s seen how enraged Taylor can get, but attempted murder?! Hope will be truly stunned that Taylor would go that far for revenge.

Liam will insist that they have to keep everything hush-hush. He really wasn’t supposed to be blabbing this, but he thought Hope should know what she’s up against. Since Hope’s been under attack, she needs to stay on guard and protect herself from Taylor’s wrath. Liam won’t want Taylor spiraling out of control and doing anything too crazy. He’ll just want Hope to be fully aware of the danger here.

Hope was already on edge after facing Taylor’s outburst, but this will kick things up a notch. She’ll worry not only for herself and her unborn child, but for her mother. Brooke (Katherine Kelly Lang) is certainly near the top of Taylor’s enemy list. Taylor hates Brooke’s guts, so Hope will be concerned about the threat her mom’s dealing with.

The Bold and the Beautiful spoilers say Taylor will explode at Brooke on Thursday, so Hope’s fears will be justified. Brooke and Taylor will naturally spar over their daughters. Steffy (Jacqueline MacInnes Wood) made her fair share of mistakes in her relationship with Liam, but Taylor doesn’t want to accept that. She’d rather blame the Logan women for all Steffy’s problems.

B&B fans can expect Taylor to rant about Brooke’s treatment of Steffy. She’ll feel like her foe’s adding to Steffy’s misery. Taylor will warn Brooke to back off the bullying, but it seems the only real bully here is Taylor herself. She’ll get in Brooke’s face and insist that things are going to be different for their daughters. Taylor won’t want to let Hope keep crushing Steffy’s dreams and causing heartache.

Brooke won’t think that’s happening at all, but good luck talking any sense into Taylor! She’s turning into a total mess thanks to this storyline. We’ll give you updates as other Bold and the Beautiful details emerge. Stick with B&B and don’t forget to check CDL often for the latest Bold and the Beautiful spoilers, updates and news.