BY Heather Hughes on September 5, 2018 | Comments: one comment
Related : Soap Opera, Spoiler, Television, The Bold and the Beautiful 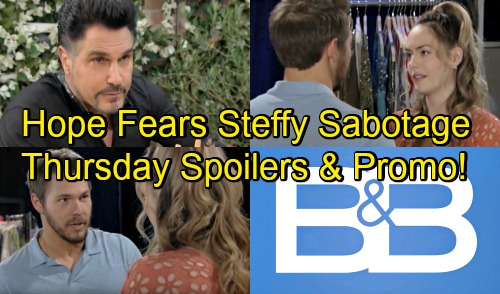 The Bold and the Beautiful (B&B) spoilers for Thursday, September 6, tease that Hope (Annika Noelle) will remain on edge. Now that Ridge (Thorsten Kaye) is making budget cuts, Hope’s worried about her bond with Steffy (Jacqueline MacInnes Wood) crumbling. She doesn’t want to cause more damage and return to clashing nonstop.

Hope will talk about how she can never give back as much as she’s been given. In her eyes, she won the prize. Hope got Liam while Steffy had to move on without him. Despite that, Steffy managed to put on a brave face and support “Lope.” Hope will contend that they’ve got a good thing going, so she’ll hate to mess it up.

At the same time, Hope knows they’ve got a complicated B&B history. Part of her will fear that Steffy’s going to target her. Hope still wants her line to be a success, so she’ll feel overwhelmed by the whole situation.

However, Liam will try to reassure his wife. He’ll tell Hope that Steffy’s been nothing but supportive. Liam will contend that Steffy isn’t going to sabotage Hope behind her back. Hope will try to believe that’s true, but her doubts should rev up over the next few episodes.

Meanwhile, Steffy will push Ridge to see the value of the intimates line. She doesn’t want trouble either, but she can’t just surrender here. Steffy’s just looking for a fair fight, so she’s entitled to make a proper pitch. Ridge will take Steffy’s speech into consideration and promise to spill his choice soon.

Other Bold and the Beautiful spoilers say Bill (Don Diamont) will open up to Brooke (Katherine Kelly) and seek a favor. They’ll be on the same page about Katie’s (Heather Tom) sole custody move. Brooke will agree that it’s uncalled for and could hurt Will (Finnegan George). She’ll be willing to help Bill, so she’ll wonder what he has in mind.

Bill will share his plan to prevent Katie’s path of destruction. Brooke will get on board and hope they can stop this custody drama before it gets ugly. We’ll give you updates as other Bold and the Beautiful news comes in. Stay tuned to B&B and don’t forget to check CDL often for the latest Bold and the Beautiful spoilers, updates, and news.