The Bold and the Beautiful Spoilers: Too Late For Redemption – Sally Puts Bill In Hospital? 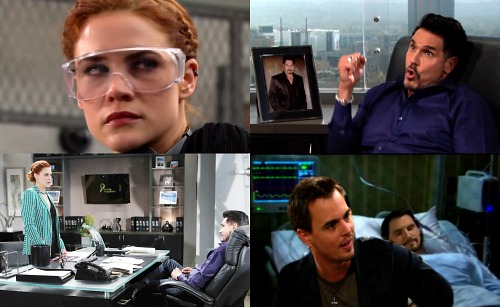 The Bold and the Beautiful spoilers tease that Bill (Don Diamont) might shock his fictional family members and B&B’s audience. He’s preached about loyalty for years, but then betrayed Liam’s (Scott Clifton) trust in one of the worst ways possible. However, this man will work toward redemption by capitalizing on perceived, or real fate.

One way for any person to be redeemed is to live a consistent life for many years, even decades. As that happens, one’s circle of stickers observe what happens and are impressed. Stickers? Yes, the people who stick by someone even though he, or she fell from grace.

Short of either scenario playing out as described starting in the next paragraph, Bill’s imminent demise would evoke restored family ties. Viewers recall that Diamont’s character concocted Caroline’s (Linsey Godfrey) fake disease. So too might Bill need to develop some horrible medical condition, or cause an accident where he bleeds, a lot, but is also rescued.

If the above doesn’t happen, then Dollar Bill will make full use of two opportunities. One involving each of his adult sons, as they independently arise, to relaunch his personal brand.

In addition to Justin (Aaron Spears), Bill will need Wyatt (Darin Brooks) and Liam to remain in contact with him. His two adult sons are the most important people in his life, along with his younger son, through Katie (Heather Tom), William (Zane Alexander Achor). That maintained contact, no matter how sporadic, must exist in order to allow Bill to exist in current fashion within his son’s minds.

Everyone knows that Liam has cut himself off from Bill in all ways. So Steffy’s (Jacqueline MacInnes Wood) expectant child will prove to be key to Bill’s revived relationship with Liam. Savvy fans will be waiting for Liam’s dad to solve some crisis relating to his son’s birth.

Yes, that type of life-altering event would adjust Liam’s perspective in a similar, but much deeper way, as compared to when Bill and Steffy rescued him and Sally (Courtney Hope).

Wyatt remains at the family company and likely would have faced a conflict with his father regarding his relationship with Katie. That nearing drama may have been delayed when Wyatt breaks things off with Katie this week.

As long as Watie gets back together, all Bill will need to do is offer his sincere blessing. That would allow Wyatt to see his father anew.

By being honest, while also looking at redemption as a personal brand relaunch, a la a business deal, Bill can reclaim all fractured family relationships. These connections aren’t actually broken, as Liam and Wyatt will learn.

Unfortunately for bad old Bill, Sally (Courtney Hope) appears to be cooking up some serious revenge for the man she sees as evil incarnate and she tells him as much. This week’s promo video for new B&B episodes February 19-23 shows Sally at what looks like a shooting range! Furthermore, CDL reports in a solid The Bold and the Beautiful spoilers post that Bill is going to wind up in hospital soon as revenge goes too far.