The Bold and the Beautiful Spoilers: Tuesday, April 24 – Wyatt Objects to Liam’s Huge News – Ridge and Brooke Spar Over Hope

BY Heather Hughes on April 23, 2018 | Comments: one comment
Related : Soap Opera, Spoiler, Television, The Bold and the Beautiful 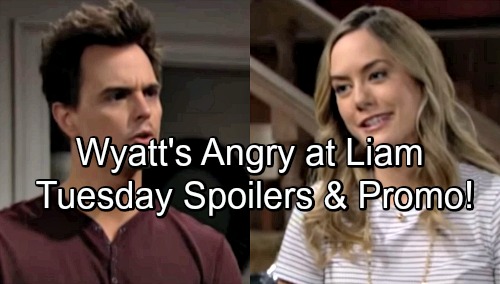 The Bold and the Beautiful (B&B) spoilers for Tuesday, April 24, tease that Hope (Annika Noelle) will still be on cloud nine over Liam’s (Scott Clifton) decision. He agreed to move in, so Hope will definitely envision a bright future. She’ll tell Brooke (Katherine Kelly Lang) that she’d really like to be the woman in Liam’s life.

Of course, Ridge (Thorsten Kaye) isn’t going to approve. The Bold and the Beautiful spoilers say he’ll hit the roof when Brooke offers updates. Ridge will feel like Brooke’s helping Hope with her sabotage. He’ll think it’s fair to make Liam this offer when Steffy’s (Jacqueline MacInnes Wood) still fighting for him.

Brooke will admit she’s had some reservations about Hope and Liam’s connection. However, her opinion’s starting to shift a bit. Brooke will argue that a change of scenery will be good for Liam. She may even suggest that Hope’s right. If Liam can’t get past Steffy’s betrayal, there’s no reason why he can’t reunite with Hope. Liam’s the one who has to make this choice.

Brooke may think Ridge should step back and let this love triangle work itself out. He could easily tell her to do the same, but we all know they’ll remain stuck in the drama. Across town, Liam will have some surprising news for Wyatt (Darin Brooks). B&B spoilers say Wyatt will be stunned by Liam’s new living arrangements. He’ll wonder why Liam would agree to move in with Hope right now.

Liam may contend that he’s going to be in a completely separate area. It’s not like he’s jumping in Hope’s bed – not yet anyway! Still, Wyatt will have major concerns. He’ll point out that Steffy’s not going to be happy about this, but Liam may bring up the annulment papers. Steffy doesn’t get a say in where Liam spends his time, so she’ll just have to deal with it.