BY Heather Hughes on December 4, 2018 | Comments: one comment
Related : Soap Opera, Spoiler, Television, The Bold and the Beautiful 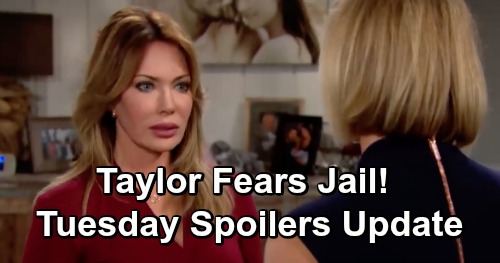 Taylor will be terrified that Brooke’s going to spill her secret, but she won’t hold back her anger either. She just can’t help herself when it comes to attacking Brooke. Of course, Brooke will give as good as she gets. She’ll explode over Taylor’s decision to go into Bill’s (Don Diamont) home and attempt his brutal murder.

Brooke will think Taylor has really reached an all-time low, but she wouldn’t be surprised to see Taylor sink even lower. That’s why she’ll be determined to watch out for Hope’s family and even Liam’s (Scott Clifton) family with Steffy (Jacqueline MacInnes Wood). This is too important to back down on.

Brooke will snap about the danger Taylor’s brought to town and how the kids have to be protected. That goes for Kelly as well as Hope’s unborn child. Brooke will bring up Taylor’s past mistakes and worry that things are only going to head downhill from here. She’ll threaten to have Taylor locked up, which will definitely set her enemy off.

While Taylor and Brooke battle it out, Pam (Alley Mills) will fume about Quinn’s (Rena Sofer) grip on Eric (John McCook). She’s firmly against their marriage and Quinn’s role within the family. Pam doesn’t view Quinn as worthy of Eric or the Forrester name, so she’ll keep up her efforts to spark change.

The Bold and the Beautiful spoilers say Pam will speak with Donna (Jennifer Gareis) on Tuesday. She’ll point out that this mission is more critical than ever. Pam will push Donna to step up her game, but she won’t slack off either. B&B fans can expect Pam to craft a scheme, which will involve Donna modeling for an audience of one. She’ll hope Eric will appreciate his private show later this week!