BY Heather Hughes on July 2, 2018 | Comments: one comment
Related : Soap Opera, Spoiler, Television, The Bold and the Beautiful 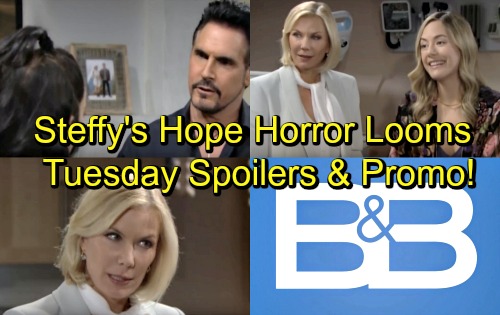 The Bold and the Beautiful (B&B) spoilers for Tuesday, July 3, tease that Steffy (Jacqueline MacInnes Wood) will fear the worst when Bill (Don Diamont) pops in. He’ll show up unexpectedly, so she’ll worry that he’s there to drop another bomb. Steffy will reiterate that she wants Bill to leave her alone. She’ll suspect that he’s ready to raise the stakes and make her even more miserable, but that’s not true.

Bill will actually bring good news this time around. He’ll reveal that after some intense soul-searching, he’s done with all his scheming. Bill will agree to forget about the blackmail plot and just let Steffy have the life she wants. He may make one last pitch to be her man, but he’ll accept that she’s in charge of her own destiny. Steffy has chosen Liam (Scott Clifton), so Bill will try to get on board.

The Bold and the Beautiful spoilers say Steffy will be relieved that her nightmare’s over, but another one’s just beginning. Hope (Annika Noelle) recently found out that she’s pregnant with Liam’s child. She’ll head to Dr. Phillips’ (Robin Givens) office to get examined and learn if the home test was accurate.

B&B fans can expect Brooke (Katherine Kelly Lang) to support Hope at the appointment. She’ll want her daughter to see this as an opportunity instead of a disaster. This is certainly a setback for Steffy, but it might work out for Hope. It may not give her the lead in this love triangle just yet, but it could at least put her neck and neck with her rival.

After Dr. Phillips confirms that Hope’s expecting, things will start to click into place. No matter what, Hope will intend on bringing a beautiful, happy kid into this world. She’ll still be nervous about telling Liam, but she’ll trust that it’ll all work out somehow. Whether Liam gets with the program or not, Hope will convince herself that she’s got this.

At Forrester Creations, Liam and Thorne (Ingo Rademacher) will continue to ponder the threat against Hope. They feel like the website comment may have been a prank, but they have to explore other possibilities. Since this could be serious, they’ll give Ridge (Thorsten Kaye) updates and let him weigh in. The guys will make a list of potential suspects and start investigating each one ASAP.