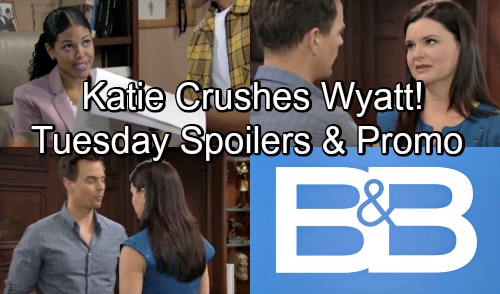 The Bold and the Beautiful (B&B) spoilers for Tuesday, June 12, tease that Xander Avant (Adain Bradley) will show up in Los Angeles. Vivienne (Anna Maria Horford), Julius (Obba Babatunde) and Maya (Karla Mosley) will all take a moment to catch up with him. Xander’s been living in England, so he hasn’t seen his aunt, uncle and cousin in a while.

B&B fans can expect Xander to defend himself on Tuesday. Julius will give him a hard time about something, so we should consider a couple of options. There’s a chance this will be some lighthearted ribbing. Julius could argue that Xander should’ve booked this trip sooner. Then again, this could involve the secret Xander’s keeping. He’s coming to town with some very dangerous knowledge!

Julius always has trouble on his hands when old connections surface. Sasha (Felisha Cooper) came to town as a family friend and ended up being Julius’ daughter. Now Xander has the power to shake things up once more. The Bold and the Beautiful spoilers say Xander could pose a threat in the weeks ahead.

However, it looks like Maya will be overjoyed to see Xander. She’ll tease him when he immediately seeks out hot girls. Maya will smile and state that the employee directory isn’t a dating aid. That may be true, but it won’t stop Xander from pursuing Emma (Nia Sioux). After Xander and Emma meet later this week, they’ll be attracted to each other right off the bat.

Elsewhere, Wyatt (Darin Brooks) will have a tough conversation with Katie (Heather Tom). They’ll realize great chemistry can’t overcome all the obstacles. Katie just won’t think they have a future together anymore. She’ll suggest it was ridiculous to believe Wyatt could be Will’s (Zane Achor) stepfather. They’re half-brothers, so that was a complicated idea from the start.

Katie will contend that Bill (Don Diamont) was right, but Wyatt won’t entirely agree. He may cling to the last bit of hope, but “Watie” is clearly fading fast. The Bold and the Beautiful spoilers say they’ll officially call it quits pretty soon. We’ll give you updates as other B&B news comes in. Stick with the CBS soap and don’t forget to check CDL often for the latest Bold and the Beautiful spoilers, updates, and news.