BY Heather Hughes on June 18, 2018 | Comments: one comment
Related : Soap Opera, Spoiler, Television, The Bold and the Beautiful 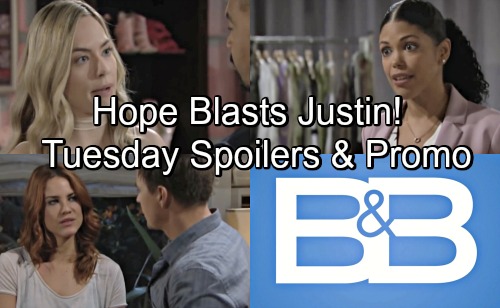 The Bold and the Beautiful (B&B) spoilers for Tuesday, June 19, tease that Justin (Aaron D. Spears) will try to clean up a mess. Maya (Karla Mosley) found out Emma’s (Nia Sioux) a Barber and ultimately blew her top. She felt confident that Emma was sent to stir up trouble, so she fired the hardworking intern.

Once Justin gets updates, he won’t think that’s fair. The Bold and the Beautiful spoilers say Justin will show up at Forrester to defend his niece. He’ll do his best to get Emma’s job back and help her regain some trust. Of course, Hope will be suspicious of Justin’s motives. She’ll wonder if this is tied to Bill (Don Diamont) and his constant scheming.

Hope will suggest that if Emma’s being used as a plant, it’s not going to work. She won’t let anyone come after Forrester, especially not Bill. However, Justin will promise that Emma’s innocent. He’ll want Hope to reconsider letting Emma stick around and prove herself at the company.

Fortunately, Hope will indeed undo the damage. She’ll scold Maya for giving Emma the boot and ask the girl to come back on board. It sounds like Emma’s dreams will remain intact, but she’ll have to be careful. One wrong move and Emma’s fashion career could be over!

Meanwhile, Wyatt (Darin Brooks) and Sally (Courtney Hope) will pull away from their steamy kiss. They’ll slow things down with another deep chat on Tuesday. B&B spoilers say Sally will keep ranting about her love life. She’ll ask Wyatt if he thinks Thomas (Pierson Fode) was using her, but he may not have an answer.

It’s better to leave all that pain in the past anyway. Wyatt will think Sally should start focusing on her bright future instead. He’ll convince her to stay in town and find a new path, so The Bold and the Beautiful fans will be seeing a lot more of Sally.

Naturally, Wyatt will be seeing a lot more of Sally as well! A hot romance is kicking off, which means this summer will really sizzle. We’ll keep you posted as other B&B news comes in. Stick with the CBS soap and don’t forget to check CDL often for the latest Bold and the Beautiful spoilers, updates, and news.