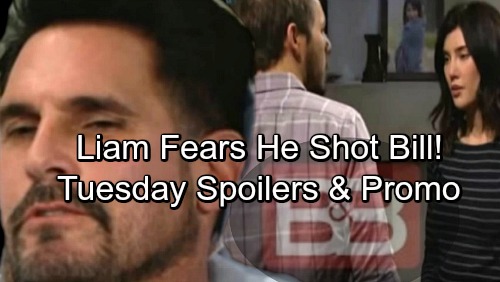 The Bold and the Beautiful (B&B) spoilers for Tuesday, March 27, tease that Steffy (Jacqueline MacInnes Wood) will need a big favor from Liam (Scott Clifton). She tried talking some sense into Bill (Don Diamont) herself, but that plan didn’t pay off. Bill hasn’t changed his mind about accusing Ridge (Thorsten Kaye) of attempted murder.

That’s why Steffy will push Liam to speak with his father. She’ll think Liam might be able to do what she couldn’t. Steffy will hope that Liam can help get the charges dropped, but he’ll have something else he’s mulling over. B&B fans know that Liam just bumped his head and triggered a significant memory. He now recalls watching Bill pop the question to Steffy that night.

Naturally, this raises more questions. What else has Liam forgotten? Did he shoot Bill after that proposal and somehow forget about it? Liam has a history of head injuries and amnesia, so no one would be surprised. However, we have to examine all the facts in this mystery. It’s too early to say if Liam’s the shooter or just a red herring. Nevertheless, it looks like Liam will battle some worries!

Other Bold and the Beautiful spoilers say Bill will fume over Ridge’s alleged actions. He’ll suggest that it’s going to take more than a bullet from Forrester to take out “Dollar Bill” Spencer. Of course, Bill should really be considering other options. There are plenty of people who hate him and everyone besides Ridge is still on the loose. Somebody could easily try to finish Bill off if he’s not careful. 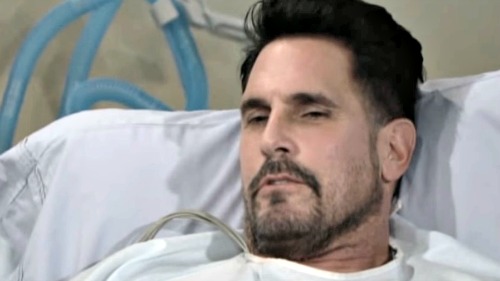 In the meantime, Brooke’s (Katherine Kelly Lang) determination will grow stronger. She’s been a mess over Ridge’s arrest, but she’ll do her best to channel her fear and rage into progress. Brooke will do whatever she can to prove Ridge’s innocence. It won’t be easy since Ridge is already behind bars for the crime, but Brooke will give this mission everything she’s got.