BY Heather Hughes on November 6, 2018 | Comments: one comment
Related : Soap Opera, Spoiler, Television, The Bold and the Beautiful 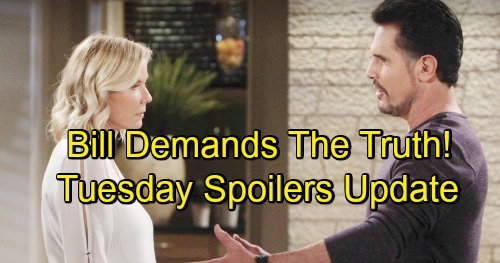 The Bold and the Beautiful (B&B) spoilers update for Tuesday, November 6, tease that Bill (Don Diamont) won’t let Brooke (Katherine Kelly Lang) avoid him. He just mentioned Ridge (Thorsten Kaye) and Judge McMullen’s (Joe Lando) link, so he’s going to want more info. Brooke may hope for a quick getaway or at least a subject change, but Bill won’t back down. He needs answers and he needs them now!

Unfortunately, Bill’s mission will hit a snag. Brooke will be tempted to come clean about Ridge’s influence on the judge, but she won’t actually do it. However, Brooke won’t claim Ridge is innocent either. She’ll carefully sidestep the issue and suggest that Bill’s free to do whatever he wants. If that means digging into this even further, then so be it.

Deep down, Brooke thinks Bill deserves the truth about why he lost Will (Finnegan George). Katie (Heather Tom) relented on frequent visits between Will and his dad, but Bill doesn’t have custody rights. Ridge and Thorne’s (Ingo Rademacher) gloating has only made Brooke more sympathetic. Bill’s recent ordeal in the hospital helped with that as well, so Brooke’s guilt is growing.

Of course, there’s another side of Brooke and it’s desperate to protect Ridge’s secret. She knows how powerful Bill’s wrath can be, so she’ll worry about what it’ll happen if he scores proof. Brooke doesn’t want Ridge to end up in prison, but it’s certainly a possibility. She’ll warn Ridge about that after her latest conversation with Bill.

Brooke will make it clear that Bill’s closing in on the real story, so Ridge had better be ready. A B&B storm’s brewing and that means fans should prepare for trouble. Speaking of trouble, Donna’s (Jennifer Gareis) brought plenty of it to town. Quinn (Rena Sofer) can tell that Donna’s far too interested in Eric (John McCook), so she’s trying to nip this threat in the bud.

Alas, The Bold and the Beautiful spoilers say that plan won’t pay off. Donna will see Quinn’s darkness rise to the surface on Tuesday. Nevertheless, Donna will shove aside any concerns and hint that the war is on. She won’t want Quinn to think she’s got the upper hand here.