BY Heather Hughes on October 8, 2018 | Comments: one comment
Related : Soap Opera, Spoiler, Television, The Bold and the Beautiful 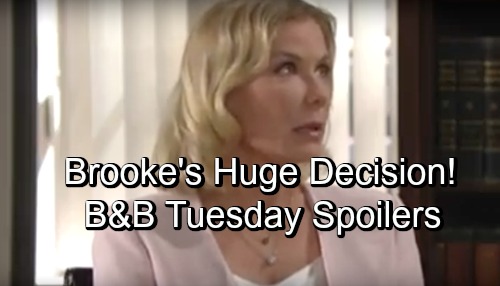 The Bold and the Beautiful (B&B) spoilers for Tuesday, October 9, tease that Brooke (Katherine Kelly Lang) will refuse to drop her argument with Ridge (Thorsten Kaye). She just confronted him about influencing Judge McMullen (Joe Lando), so this is obviously a big deal. There’s no way Brooke will just stand down and let this go. Instead, she’ll rant about Ridge taking his revenge mission too far.

This is about more than just Ridge and Bill’s feud. Will (Finnegan George) was at the center of this custody war. Brooke will be appalled that Ridge would manipulate a little boy’s life like that. Of course, Ridge will reiterate that Thorne’s (Ingo Rademacher) a better role model. He won’t be sorry that he made Bill pay the price, but he’ll suggest that it was in Will’s best interest anyway.

Brooke won’t agree, but she’ll feel backed into a corner. Ridge will remind Brooke of what’s at stake for him if she blabs. Brooke will probably vow to keep her mouth shut, but it won’t take long for guilt to take a toll. The Bold and the Beautiful spoilers say Brooke will feel terrible about keeping Bill in the dark.

Katie (Heather Tom) will get updates by the time Thursday’s new episode, October 1 rolls around, so Brooke won’t manage to stay completely quiet. By spreading the word about Ridge and the judge, Brooke will be taking a huge risk. She can’t control what Katie might ultimately do with this info.

Even before Brooke’s upcoming bombshell, Katie will wonder if she screwed up. B&B fans can expect Bill to do something special on Tuesday. He’ll hope to show Will that he’s devoted to him, so he’ll make a sweet gesture. When Katie sees Will’s appreciation and Bill’s commitment, she may hate that she took the custody issue so far.

Once Katie hears about the Judge McMullen situation, will it drive her to make some daring moves? Would she actually turn on Ridge like that? The Bold and the Beautiful spoilers say the drama’s about to heat up, so we’ll keep you posted as other B&B news comes in. Stick with the CBS soap and don’t forget to check CDL often for the latest Bold and the Beautiful spoilers, updates, and news.