BY hellodrdavis on September 3, 2018 | Comments: 2 comments
Related : Soap Opera, Spoiler, Television, The Bold and the Beautiful 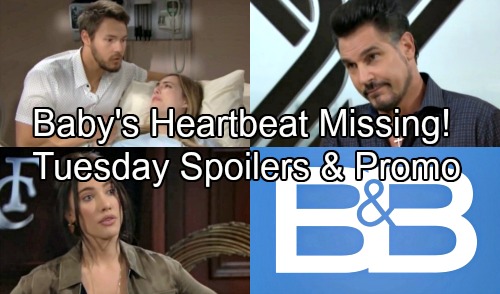 The Bold and the Beautiful spoilers for Tuesday, September 4, tease that Hope (Annika Noelle) and Liam (Scott Clifton) will be in a horrifying situation, as Dr. Phillips (Robin Givens) attempts to locate their baby’s heartbeat via ultrasound. A concerned Dr. Phillips will continue to search for a heartbeat while a worried Hope and Liam try to stay calm.

It will all be too much for Hope, who will cry and wonder what’s wrong. Thankfully, it looks like Hope won’t lose the baby now, so Dr. Phillips should find the heartbeat eventually. But what will Hope’s cramping and spotting mean for the remainder of her pregnancy? Will she be considered high-risk from now on? She may have to take it easy and avoid stress going forward.

Meanwhile, on B&B’s new episode on Tuesday, September 4, Steffy (Jacqueline MacInnes Wood) will arrive at Forrester and fill the others in on what Hope and Liam are going through at the hospital. Steffy will feel truly scared and worried about Hope and the baby, and she’ll announce that “we all have to be there for each other, in a way we’ve never been.”

Finally, on Tuesday, September 4, Thorne (Ingo Rademacher) will pay Bill a visit at Spencer. Thorne will want to discuss Bill’s upcoming custody fight with Katie (Heather Tom). Thorne may try to persuade Bill not to fight Katie’s petition and simply accept Katie as sole custodian of Will (Finnegan George). He’ll probably argue that it would be better for Will not to see his parent locked into a huge fight.

But Bill will quickly set Thorne straight. “I’m fighting for my son,” he’ll snarl, “so I’m fighting harder than I have for anything or anyone in my life.” There’s no way Bill’s going to back down from a fight where his son is concerned, especially since it seems to him that Thorne is orchestrating the entire situation.