The Bold and the Beautiful Spoilers: Wednesday, January 17 – Bill Gets Close To Desperate Steffy – Thorne Snubbed By Elated Ridge

BY Marcy Cohen on January 16, 2018 | Comments: one comment
Related : Soap Opera, Spoiler, Television, The Bold and the Beautiful 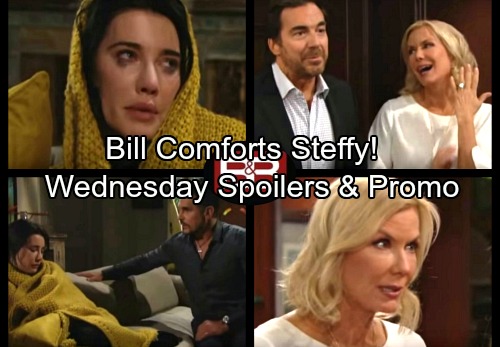 The Bold and the Beautiful (B&B) spoilers for Wednesday, January 17, tease that Ridge (Thorsten Kaye) and Brooke (Katherine Kelly Lang) will be excited to share their good news. Their engagement just became a bit more official. Now that Bill (Don Diamont) has signed the annulment papers, Brooke has accepted Ridge’s ring and they’re ready to tie the knot.

Ridge will call a family meeting to spread the word of their upcoming nuptials. He’ll intentionally leave Thorne (Ingo Rademacher) out of the loop on all this. Ridge doesn’t like his brother right now, so he’ll see no need to include him. 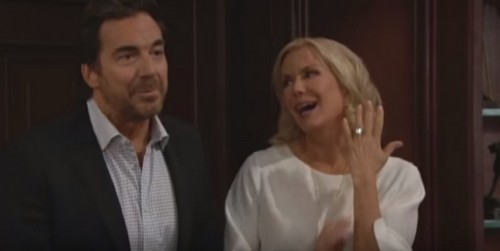 Thorne will be furious when he gets updates later this week. He won’t approve of Brooke’s decision to move forward with Ridge, so he’ll keep fighting as long as he can. In the meantime, Bill (Don Diamont) will visit Steffy (Jacqueline MacInnes Wood) again. She’ll look pretty rough with her puffy eyes and depressing pout. Steffy’s a mess now that her relationship with Liam (Scott Clifton) is over.

Steffy will wrap herself in a blanket and try to hide from the world. Bill will decide he can’t let Steffy do that. He’ll do his best to offer some comfort in Wednesday’s B&B episode. Steffy will point out that her marriage can’t be saved. She’ll think Bill should just give it a rest and go home.

Bill will maintain that he’s there because he cares. He’ll promise Steffy that she doesn’t have to go through this alone. Back with Brooke, she’ll have an important chat with Hope (Annika Noelle). The Bold and the Beautiful spoilers say Brooke will thank her daughter for supporting her relationship with Ridge. Brooke will note that it means the world to her, but she’ll also have a tricky request. 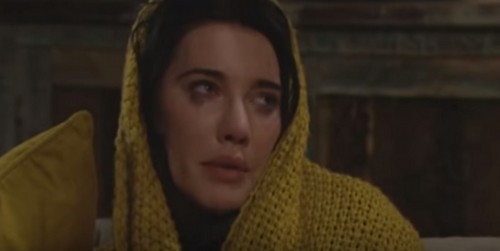 Hope will listen as Brooke talks about wanting Steffy’s support as well. Steffy’s seemingly on board with the “Bridge” reunion, but Brooke will have plans for a little insurance policy. She’ll think she should ask Steffy to be her matron of honor.

Of course, Brooke will want to make sure Hope’s OK with that. She wouldn’t want to offend her daughter. After getting Hope’s blessing, Brooke will head over to see Steffy. She’ll be stunned by the shape she finds her in.

Brooke will take one look at miserable Steffy and determine that something’s seriously wrong. She’ll attempt to pry some info out of her, but Steffy may be reluctant to divulge much. We’ll keep you posted as other Bold and the Beautiful details emerge. Stick with B&B and don’t forget to check CDL often for the latest Bold and the Beautiful spoilers, updates and news.