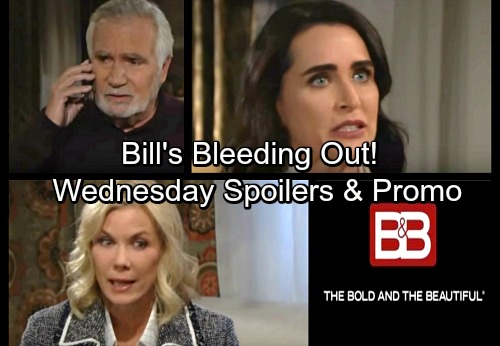 The Bold and the Beautiful (B&B) spoilers for Wednesday, March 7, tease that Eric (John McCook) will worry about Quinn (Rena Sofer). She was raging about Bill (Don Diamont) when she left, so Eric is understandably concerned about what she might do. Eric will call Quinn, but it looks like it’ll go to voicemail. He’ll fill Quinn in on his fears and urge her to come home right away.

Meanwhile, Quinn will fume over everything her enemy’s done. She’ll insist she’s never hated anyone more than she hates Bill Spencer. Since Bill just got shot, Quinn will become a suspect soon. Even Eric may wonder if Quinn had something to do with Bill’s suffering, but she’ll undoubtedly claim she’s innocent. 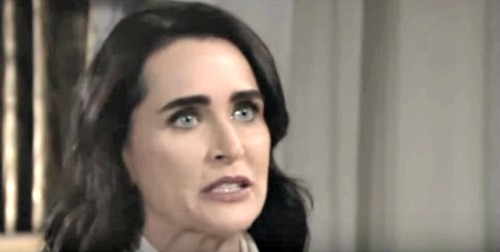 There’s a good chance Quinn will be telling the truth. The Bold and the Beautiful spoilers say this mystery will bring plenty of shockers, so Quinn probably isn’t the culprit. No one would be surprised if she pulled the trigger, which means we should keep looking for the real shooter. The guilty B&B character’s still out there, but his or her secret will spell big trouble.

Elsewhere, Brooke (Katherine Kelly Lang) will hope Ridge (Thorsten Kaye) can control his anger. She knows how he can be when he’s pushed to his breaking point. Brooke will just hope Ridge won’t do something he’ll regret. She doesn’t realize Bill’s already been taken down by a mysterious figure in the dark.

Once Brooke eventually gets updates, you can bet she’ll grill Ridge about his potential guilt. For now, Bill will remain in need of serious help. He’ll bleeding out on the floor of his own home. The Bold and the Beautiful spoilers say Katie (Heather Tom) will show up to rip into Bill. Instead, she’ll find herself in the position to save his life.

Katie will grab her phone and call for an ambulance. Despite her current feud with Bill, she cares about him on some level. Plus, Katie certainly won’t want the father of her child to die. Fortunately, Bill will make it to the hospital in the nick of time. He’ll be saved, but it won’t be long until he’s hurling accusations.

B&B fans won’t want to miss the exciting moments ahead. We’ll keep you posted as other news comes in. Stay tuned to the CBS soap and don’t forget to check CDL often for the latest Bold and the Beautiful spoilers, updates and news.