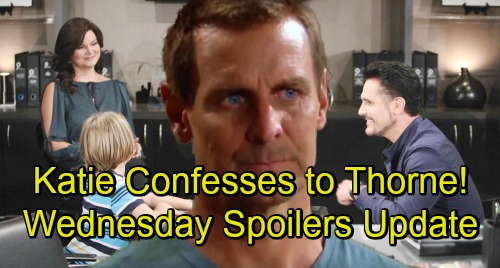 The Bold and the Beautiful (B&B) spoilers for Wednesday, October 17, tease that Hope (Annika Noelle) will seek some answers. Steffy (Jacqueline MacInnes Wood) just dropped the “Brill” kissing bomb, so Hope will blast her mother and demand an explanation. She’ll wonder why Brooke (Katherine Kelly Lang) would risk her marriage for a guy like Bill Spencer (Don Diamont).

Brooke will argue that Bill kissed her, not the other way around. He was the one who made his move, but she promptly reminded him she was married. However, Brooke will admit it caused plenty of conflict with Ridge (Thorsten Kaye). He’s willing to move past it, but not if Bill keeps hanging around and stirring up trouble. From now on, Brooke will have to steer clear of her devious ex.

Hope will agree that it’s a good plan. She won’t want Brooke to destroy what she’s built with Ridge, so she’ll push her mom to set some boundaries. The Bold and the Beautiful spoilers say Brooke will try to do that later this week. She’ll bump into Bill and make her position crystal clear.

In the meantime, Thorne (Ingo Rademacher) will be confused and irritated. When he gets updates on Katie’s (Heather Tom) latest decision, he won’t be pleased at all. They just went through a major custody battle, but Katie’s not even sticking to it. She intends to let Bill see Will (Finnegan George) whenever he wants, so Thorne just won’t understand.

At first, Katie may try to explain without including the judge drama. It’s not a great idea to put that secret in too many hands. Nevertheless, Thorne is Katie’s husband now. She’ll ultimately decide that she owes him some honesty. Besides, Thorne would just keep pushing and pushing anyway. Katie might as well come clean, so she’ll spill how Ridge influenced Judge McMullen (Joe Lando).

B&B spoilers say Thorne will be taken aback by the news, but he should justify Ridge’s actions. If Thorne could’ve pressured the judge for a favor, he probably would’ve done it in a heartbeat. Ridge just happens to be the one who could pull it off.

Thorne still won’t think Katie should back down on her custody stance. He’ll point out that she won and that’s all that matters. Of course, Katie won’t have the same perspective. She’ll stand her ground and insist this is how it has to be. Katie didn’t win fair and square, so she’s not going to keep Bill from his son.