BY hellodrdavis on September 19, 2018 | Comments: 2 comments
Related : Soap Opera, Spoiler, Television, The Bold and the Beautiful 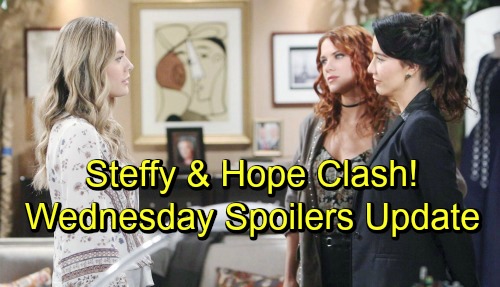 The Bold and the Beautiful spoilers update for Wednesday, September 19, tease that Hope (Annika Noelle) and Steffy (Jacqueline MacInne Wood) will go at it again, this time over Sally (Courtney Hope). Hope won’t be pleased that Steffy has invited Sally to be a designer for the Intimates line. Previously, Hope relegated Sally to intern-level work on the Hope For The Future line and told her she’d never be a designer at Forrester.

Hope, Steffy, and Sally will have a tense conversation about Steffy’s decision, and Hope will express her displeasure. Hope may point out Sally’s history of stealing designs from Forrester and insist that Sally has proven to be untrustworthy. It sounds like Hope may even disrespect Sally’s capabilities as a designer, as Sally fires back “not only did I have my own line, I ran my own company!”

But Steffy won’t back down from her decision to bring Sally on board as a designer, insisting that everyone deserves a second chance. From there, things will only get worse, as Hope and Steffy have a heated exchange about the more general topics of loyalty and life lessons.

Next, on the new B&B episode on Wednesday, September 19, Justin (Aaron D. Spears) and Bill (Don Diamont) will strategize about the custody hearing. Now that Bill knows that Katie (Heather Tom) and Thorne (Ingo Rademacher) are engaged, he’s expecting an uphill battle, and Justin will agree. Justin will warn Bill that “if those two get hitched before the hearing, a judge might consider the stable home to be a factor.”

Ridge will also do some strategic thinking on his end as well. He’ll worry that Bill may have something up his sleeve when it comes to fighting for custody of Will (Finnegan George). B&B spoilers say that Ridge will soon call a meeting with the judge who’ll be presiding in the custody case, probably to pre-empt anything sneaky Bill might have in mind.

Finally, on Wednesday, September 19, Zoe (Kiara Barnes) will be on cloud nine when she learns that Xander (Adain Bradley) is going to be modeling alongside her for the Intimates line. She’ll even get flirtatious with him when he explains exactly how Steffy spied him in his underwear before offering him the modeling gig. But will Xander be receptive to her advances?

It sounds like a lot of B&B drama is heating up for Wednesday, so stay tuned! We’ll give you updates as B&B news comes in. Stick with the CBS soap and don’t forget to check CDL often for the latest Bold and the Beautiful spoilers, updates, and news.