The Bold and the Beautiful Spoilers: Wednesday, September 5 – Ridge Opens Up A New Battle Between Steffy and Hope – The War is On

BY hellodrdavis on September 4, 2018 | Comments: one comment
Related : Soap Opera, Spoiler, Television, The Bold and the Beautiful 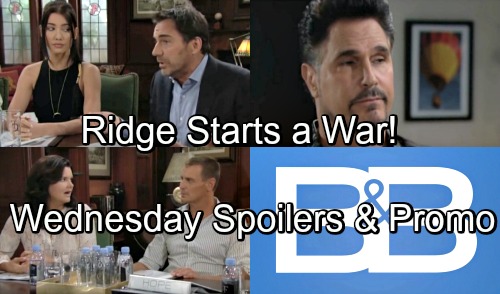 The Bold and the Beautiful spoilers for Wednesday, September 5, tease that Ridge (Thorsten Kaye) will lay a big announcement on everyone at Forrester Creations. Due to budgetary restrictions, Forrester won’t be able to fully fund both the Hope for the Future (HFTF) line and the Intimates line.

Ridge won’t be happy about it, but he’ll declare in an open meeting that “it’s either going to be HFTF or Intimates, but it can’t be both, sorry.” This, of course, means that either Hope’s (Annika Noelle) or Steffy’s (Jacqueline MacInnes Wood) line is going to get cut, and the two ladies will be once again at odds.

This will, of course, re-ignite the competition between Hope and Steffy, and Brooke (Katherine Kelly Lang) will worry about what this means for Hope and Steffy’s truce, which had been going so well. It looks like Hope and Steffy will remain at peace where Liam is concerned but at war where business is concerned!

Meanwhile, on B&B’s new episode on Wednesday, September 5, Katie (Heather Tom) will make it known at Forrester that she’s going for full custody of Will (Finnegan George), so it looks like she’s resolved her doubts on the matter. But what will Brooke do when she learns about the decision? B&B spoilers say that Brooke will take Bill’s (Don Diamont) side in the dispute, so look for some drama there.

Finally, on Wednesday, September 5, Bill will express his thoughts to someone about his rationale for fighting Katie’s custody petition. “It’s my family we’re talking about,” he’ll say calmly and thoughtfully, “I’m going to fight for it.” Could he be talking with Brooke? B&B spoilers say that Bill will soon ask Brooke to speak on his behalf at the custody hearing, so the two could be discussing that.